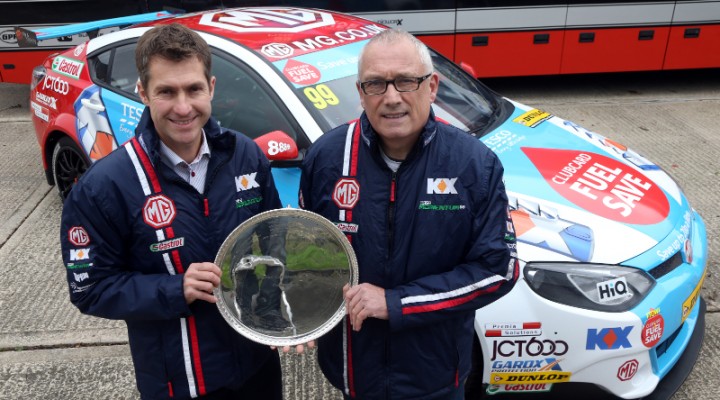 MG confirmed today (10 December) that it will return to the Dunlop MSA British Touring Car Championship in 2015 with the MG6 GT and continue the successful partnership with Triple Eight Race Engineering that saw MG lift the manufacturers’ championship title this year.

MG Head of Marketing, Matthew Cheyne, said “I am delighted to be able to confirm that MG will return to defend its title as BTCC manufacturer champions in 2015.  The three-year programme to race the MG6 GT with Triple Eight has proved so successful both on and off track that there was little doubt we would return in 2015.”

MG’s BTCC engineering partner, Triple Eight Race Engineering, is working on an exciting new-look driver line-up for 2015, which will see the MG6 GT’s re-branded and given a fresh look, courtesy of a host of new sponsors joining the team next year.

Cheyne, continued: “The MG brand is iconic and Triple Eight are the most successful team in the history of BTCC, as such together we are an attractive proposition and believe we will be in contention to defend our title next year. The BTCC has never been in such good shape and with a full grid containing a wide range of manufacturers and models, plus rising attendance and viewing figures, I am excited at the prospects for 2015 for MG, Triple Eight, our drivers, sponsors and of course our loyal and growing worldwide MG fan base.

“The BTCC programme has been a key part in re-establishing the MG brand in the UK and also globally. It has raised awareness of the brand with TV, online and press coverage that is not only followed in the UK but also across the world. The MG6 GT race car was designed to resemble the road car as closely as possible and in addition to the on-track programme,we have also operated a very successful mobile showroom next to the track, so BTCC fans can see and touch the latest MG6 and MG3 products.”

Triple Eight Race Engineering Managing Director and co-founder, Ian Harrison, commented: “We’re very much looking forward to next year, our fourth with MG and 19th in the BTCC. Over the past three years we’ve taken more race wins than any other constructor and manufacturer, and next year we are intent on extending that run of form. There’s little doubt that 2015 will be even more competitive than this year as teams get a handle on developing their cars, but we’re confident we’ve assembled the right elements to take it to the other teams and ensure we’re in the mix by the end of the year.”

MG is currently the fastest growing automotive brand in the UK with sales up 573 percent year to date (SMMT data). The MG6 is already a favourite with MG owners for its drivability, affordability and exceptionally high levels of standard equipment included and was also voted by owners to be the Best Handling and sixth overall Best Car to Own in the 2014 Auto Express Driver Power Awards.