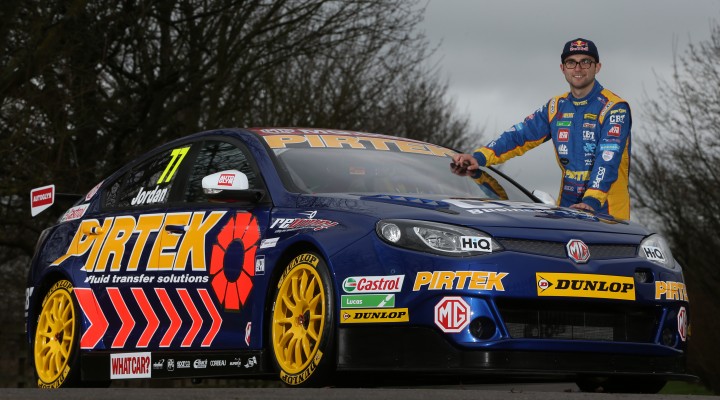 Jordan, the 2013 BTCC champion, and his prime sponsor Pirtek will move to the car and team that took the 2014 manufacturers’ title in a major new phase of his British Touring Car Championship career and Jordan says he is excited about his prospects for the coming season.

“We looked at a lot of different options for 2015 and it came down to deciding on the package that gave us the best chance of winning the championship,” he said. “It is a complete change for all of us and I’m really positive about it. This is a fabulous opportunity for me and my loyal sponsors to race a manufacturer-backed car from an iconic brand.”

Triple Eight is the most successful team in the BTCC field and the MG6 GT is a proven race-winning package. The 2015 season will be the squad’s 19th year in the BTCC, while MG is the fastest-growing automotive brand in the UK.

Andrew raced for the Triple Eight team in his second season in the BTCC back in 2009. “Now I’m going back with a lot more experience to try and lead the team to the championship,” he added.

For the 25-year-old racer from Lichfield, who has already taken 14 BTCC wins and 41 podiums, the move away from a family-run team is a major step. “I want to be more prepared than I have been in the past and this package will allow me to focus 100% on the job of driving. From my pre-event planning to my mental approach and fitness, I need to make sure that I am more prepared than ever in every aspect.

“I’m really looking forward to the challenge of moving to a different team and am very open to take on board as much as possible from their NGTC knowledge. I believe, with what Triple Eight has learnt over the last three years of NGTC and what I have learnt myself, we will be able to make gains through our winter testing programme.”

Jordan will be one of the stars of this weekend’s Autosport International at the Birmingham NEC (8-11 January). He will be unveiling his 2015 MG on the BTCC stand in Hall 6 on Thursday at 10:00 – keep an eye on btcc.net and our social media channels for the latest images.