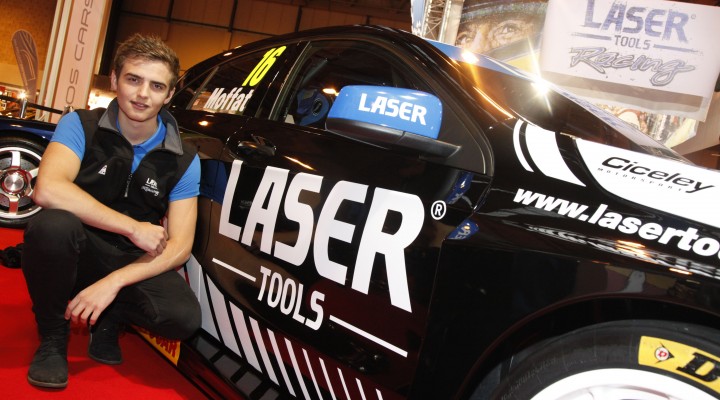 There have been plenty of exciting announcements and unveilings already at the 2015 Autosport International show, and one of the most popular new arrivals is the Laser Tools Racing Mercedes A-Class. The btcc.net team caught up with driver Aiden Moffat to get his thoughts on the new car and the season ahead…

The car has caused quite a stir here at Autosport International – are you pleased with how it’s turned out?
“It’s absolutely stunning! The show is the first time I’ve seen it in the flesh – I’ve managed to get down a couple of times to see it in-build at Ciceley but I’ve been abroad over Christmas and New Year so I never got a chance to see finished it until now!”

While there’s still a way to go to the Season Launch this is essentially the start of the year for you – where would you like to be by the end of 2015?
“We’re aiming high this year – we’d like to get at least one top five before the end of the season which in this championship is a tall order, but I feel the need to push myself and keep going forward. There’s no point aiming for something that’s comfortably achievable as you’ll never progress, so I’m going to try and get the most out of myself and the car.

“We’re in a much better place this year compared to last as well. We were rushing around trying to get everything finished then and I had a big crash at Thruxton last pre-season which hurt our testing badly, but this year we’ve got everything confirmed and it’s almost ready to go. We’ve got at least four test days planned with the possibility for more so I think we’ll be starting off on a much stronger foot.”

You seem to work closely with Laser Tools in everything you do around the paddock – is it important to have that kind of relationship with your sponsor?
“We’ve got a very good bond with Laser Tools – we don’t just look at them as a sponsor but as a friend as well – they’re all great people and I think that’s why it works for us. We do our best to give them the best possible experience and they’re always great when we visit them.”

You’ve had a full season in the BTCC now – how important is that experience going to be for 2015?
“I’ve got my year of experience now – I think that will help us greatly, both for me and the team. A lot of the team made the big step up with us from what we raced previously and it was a bit of a gamble to have the whole team learning together but we’ve got a lot of faith and trust in the team, and I think we’ll have a very strong year.”

You can see Moffat’s car in the metal at the show on Stand 6750, plus plenty more BTCC cars and stars over the weekend on the Dunlop stand in Hall 6. Click here to see the latest pictures over on our Facebook page.