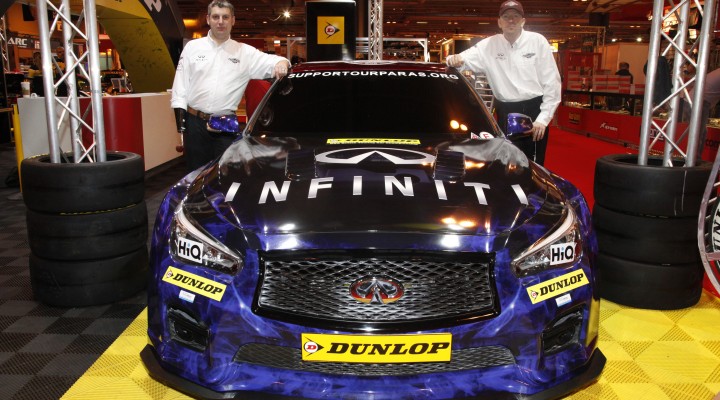 The Autosport International Show was the first chance members of the public got to meet the new-for-2015 Infiniti Support Our Paras Racing squad and see the imposing Q50 and its new livery in the flesh. As a new manufacturer outfit in the Dunlop MSA British Touring Car Championship the unveiling understandably grabbed headlines, and btcc.net got the full story speaking to the drivers, Infiniti representatives and two injured paratroopers who have been recently employed to work in the team.

In part three of our feature on the team, we speak to two injured paratroopers who have recently been hired as part of the team – Daz Fuller and John Brookman…

You must be extremely excited to be a part of BTCC 2015?

JB: We’re proud men determined to be the best, whether that’s in the army on the battlefield or out on the track. Using the skills that are built and engrained into us, transferring it from one to the other makes perfect sense and is very exciting!

Are you prepared for the unique challenge of racing in the BTCC?

JB: We all know each other’s limitations, so we can adapt and overcome any and all of the challenges we’re going to face in this environment. It’s comfortable for us to be around other guys in the same situation, like if someone needs to go and have a rest for ten minutes then we all understand and make sure that we can always get the work done.

DF: We’re prepared as much as anyone can be. We know how manic a race weekend can be but we’ve got plenty of experience of stressful situations in our military careers and we’ll just transfer how we dealt with that to how we’ll work in the pit lane. In the army you always train one level above your actual job so that you can step up if you need to and we’ll be taking that into the team. In the end though, when it gets manic and it gets hard you have to laugh and get on with the job.

How is the set-up of the team going to work as far as personnel are concerned?

JB: There will be part-time lads volunteering their time as they are still in the discharge process as well as ourselves who will be working full time with the team.

DF: We’ve got enough people to run the team between events and will be bringing more people on board over race weekends wherever we need them. At the end of the day the whole thing is about the charity we’re supporting, and we want as many people as possible to come and help us not just the eight that are there day to day. We’re all a big family in the parachute regiment and we hope as many guys as possible can come along and help out.

The support at the Autosport International show has already been impressive, you’re going to reach a lot of people with this project

JB: That’s what we’re here for – it’s to get the message out there and support other paras and their families.

DF: We’re really looking forward not just to the work we’re doing, but also being a part of the BTCC family, the fans and all the other teams up and down the pit lane. I’m sure there’s plenty of banter and fun and we can’t wait to get involved.