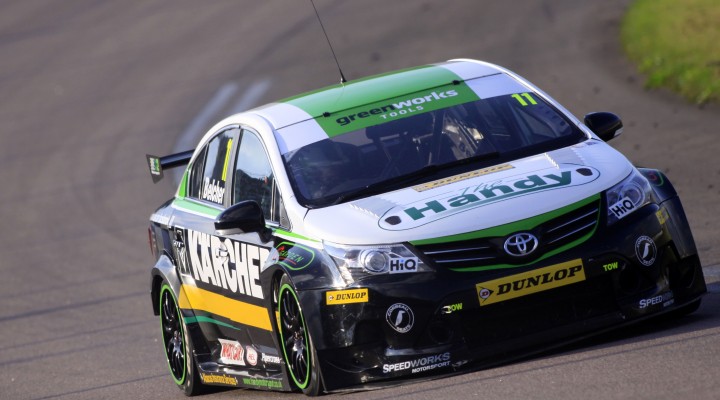 Following a rollercoaster debut season in the Dunlop MSA British Touring Car Championship, Simon Belcher and Handy Motorsport are hoping that updates to the car plus changes to engineering personnel will bring a host of points-scoring finishes in 2015.

Preparation for the coming campaign is underway, and speaking to btcc.net driver Belcher commented, “Once the Autosport Show is out of the way it really feels like the season is up and running. When last season was over there was a big sigh of relief that we could have a couple of months rest, but it’s all systems go and we’re getting everything ready for 2015.

“This time last year it was the first time I got to experience the BTCC, the fans and what it was all about which was very humbling. Now having been in it for a year I’m just as excited but a lot more experienced!”

Belcher’s most memorable moment was undoubtedly and unfortunately his huge accident at Thruxton:

“The fans were absolutely amazing after Thruxton,” Belcher continued. “That was only my third ever touring car meeting and to end up on the roof in the trees really wasn’t the plan! We ran with the idea of the t-shirts and I just couldn’t believe how many great fans there are out there who really care about the series. We’ve met so many people throughout the year – everyone and everything to do with the championship is great, from the officials to the media and the fans, it’s great to be a part of it and I can’t wait to be a part of it again this year.”

The 41-year-old had hoped to score points in his first season in the BTCC, and although this didn’t quite materialise he is confident that with a year’s experience under his belt he can achieve that goal this year. “The level of competition didn’t surprise me,” said Simon. “I knew I was coming into the toughest championship in the UK and probably in the toughest year ever with so many champions and the depth of quality throughout the grid. Last year was always going to be my learning year, and with the crash at Thruxton that put some financial constraints on us that had an effect on our performance.

“We couldn’t quite break into the top 15 and the one time it looked time we were going to I got turned around on the last lap at Rockingham, but when it comes, boy are we going to celebrate. We’ve learnt so much – the first time you go to a BTCC meeting and line up on that grid it’s just mind-blowing. With two or three races under the belt you put that behind you and everyone is fair game!

“It’ll be tough this year, but compared to where I was last year I’m in such a different place in terms of experience and pace. We have a new engineer on board – Geoff Kingston – who is renowned in touring cars and has been for many years.”

It’s not just personnel changes that Belcher is hoping will bring success in 2014. He concluded, “We’re making a lot of changes to the car as well. We’ll have a new, lighter shell in the early part of the year, we’ve made a lot of changes to aero and the dampers, and it should all help make the car a lot more competitive. A couple of tenths of a second can be 15 places on the grid! We want to come away at the end of this year with a fistful of points.”