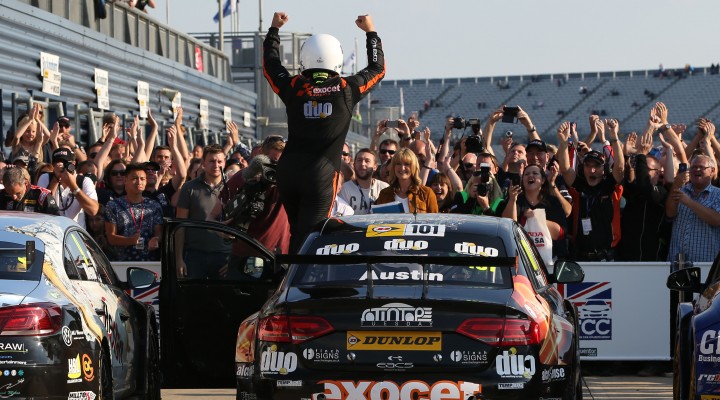 The Exocet Racing Audi A4 will have a new look on the 2015 Dunlop MSA British Touring Car Championship grid according to driver Rob Austin. The two-time race winner recently spoke to btcc.net, and told us, “Sherman will look very different this year – we’re keeping people guessing at the moment. We’ve done a lot under the skin but also externally you’ll see quite a significant difference. I think when people see the car it’ll cause a bit of a stir – it’s going to look awesome!”

As well as visual updates, the 33-year-old is confident that his 2015 campaign is built on stronger foundations than last season’s assault.

“We’ve had a really good winter,” continued Austin. “We’ve had fantastic stability thanks to our two-year deals with our main sponsors and it’s allowed us to do an immense amount of work. The day last year’s championship finished we were hard at it the next morning preparing.

“I think in 2014 it really hit home that I needed to change something. I don’t feel I performed at my best as a driver, I made some silly mistakes and wasted some golden opportunities. With the current format of the BTCC, if you make a mistake in race one or free practice it messes up your whole weekend.“

This realisation has prompted changes in the Rob Austin Racing team, as Rob explained, “We’ve done a slight restructuring within the team – so far I’ve been my own engineer, team manager and driver so Sundays have been pretty busy for me!

“My number one mechanic Matt has been with me since before I was racing in the BTCC, we’ve been working for years on the set-up side, and at the end of last season I was very proud to be able to promote him to our engineer. He’s a lot smarter than me, so I think we’ll be a powerful combination in this new structure!”

Ultimately Austin hopes that these changes will lift the Audi A4s up the grid and bring more race wins over the coming 30 races. He concluded, “2013 was a good step forward for us – but then we got quite destabilised last winter and there was a period where we weren’t sure what was happening so we couldn’t focus on preparing for 2014.

“With the stability we have this year, you wouldn’t believe the difference that makes. Everyone is pulling in the same direction now, and how you prepare for the season determines how it’s going to happen. If you’re trying to play catch-up it’s hard to pull it back, and we’re certainly better prepared than we ever have been before. It’s our target to win more races, and hopefully in more places than just Rockingham!”