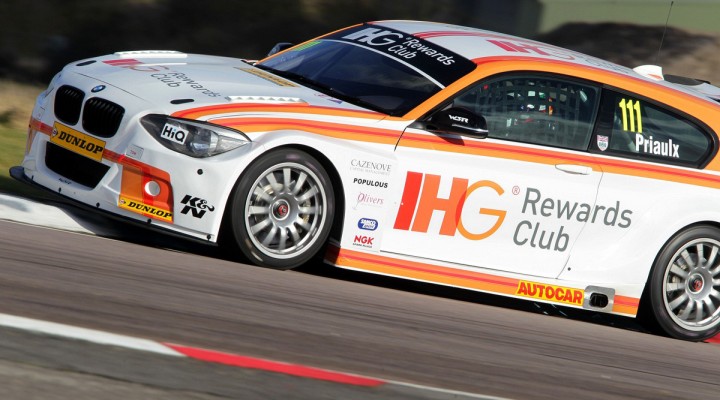 Andy Priaulx grabbed headlines when he signed for champion squad West Surrey Racing earlier this year. He joins the 2015 Dunlop MSA British Touring Car Championship grid as a three-time world champion but hasn’t raced in the top British series since 2002.

Over the past two days Priaulx has been at Thruxton behind the wheel of his BMW 125i M Sport for the very first time. Having raced in a variety of cars in the last few years, the Guernseyman was taking things steadily in the cold conditions.

“The car is really what I expected,” said Priaulx. “Coming from a GT/GTLM car it’s been quite a big transition and obviously that’s something I’ll have to get used to because it’s something I’m going to be doing throughout the year.

“The car didn’t do anything that made me think ‘that’s not very nice’, which is a good place to start! This is our very first roll out of the car, there were the usual little issues to iron out first thing but then I went out and set a lap time which was pretty good.”

With another huge grid anticipated for 2015, Priaulx is under no illusions that he’ll have to adjust his racecraft to suit the rough-and-tumble of the UK’s premier motor sport series. “It won’t take me long to sort the driving side of things,” Andy continued. “It’s going to be about learning how your team-mates work around you, who to trust and who not to trust out on the circuit.”

The close racing and non-stop action of the BTCC is undoubtedly the main draw that brought Priaulx back to the championship, as he concluded after a successful first couple of days behind the wheel, “I do love touring car racing, it’s just really intense! I am a touring car driver at the end of the day but it’s been five years since I’ve been behind the wheel of one which is a long time! I’ll be working very hard to get my head around the car, and we’ve got a lot of things to work on before the season starts!”