Plato: “We’re going to be a force to be reckoned with” 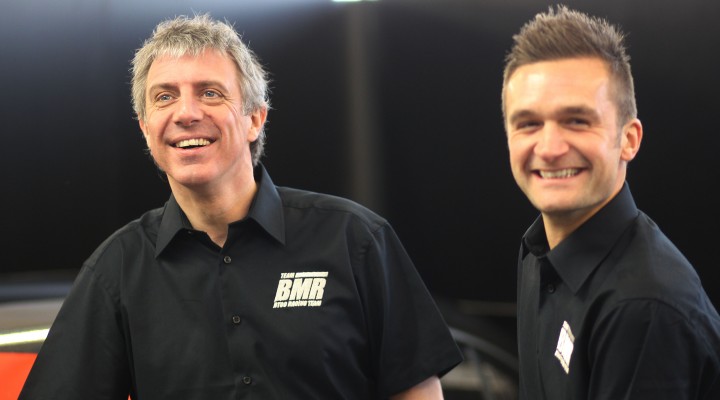 Following the sensational announcement that double Dunlop MSA British Touring Car champion Jason Plato will be teaming up with reigning champion Colin Turkington at Team BMR this season, btcc.net caught up with the two drivers on a recent test day to find out a bit more about how the project came together. Today we’ve got Plato’s side of the story, and check back tomorrow for what Turkington’s first reactions to the VW CC.

Firstly, can you talk us through how the switch to Team BMR came about?
“The move came about because internally within my organisation the deal we put together with Triple Eight and MG was a fixed three-year deal, and we decided going into 2014 that we wouldn’t want to try and renew that agreement and that it was time to move on, do something different and look for a new challenge. In the middle part of last year I started to speak with Warren along with quite a few other people, but it very quickly became apparent that Warren was the one with the big idea!

“What he wants to try and achieve with his team and where he wants to take it is exactly what I was looking for – once we knew the people that were on his hit list from a technical perspective and once I knew it was going to happen it became a very attractive proposition.”

Team BMR is a relatively young squad in this paddock, but they’ve already had some great successes – is this encouraging for you?
“What I’ve learnt over the years – particularly with NGTC – you don’t need a team that has in-house design and all the other things that you needed in the old days to be successful. What you do need is people with engineering experience on these cars. If you get the right people technically on the team, plug the right drivers in and have a strong financial base then there’s no reason why you can’t win.

“I think everyone who know the team understands why I’m enthusiastic about this project. Warren is a doer, there’s no question about it. He’s not messing around and is making considerable investment in the team. There’s four new top team members as well as myself and Colin, and you need that kind of investment to be the number one team in British Touring Cars because you’re up against some pretty classy people.”

You’ve driven the car for the first time now, is there more performance to be found?
“Those other teams are long established, have well worked out routines and they understand their cars, but when I think back to the troubles we faced starting the MG programme as late as we did in 2012 to where we got to in a very short space of time, to making it quick in all scenarios and conditions, I think we can do a lot with this car very quickly. By the end it was the best front-wheel-drive car by a long way, and that success came from engineering the cars, and the people behind that were me and Carl our chief engineer, and now we’re both here!

“I think the basics of this car are right. I think aerodynamically it’s more efficient than the MG which is nice to have because it’s essentially free performance, and I think knowing the set-ups they were running last year and the evolutions we made to the MG, there’s quite a lot of time on the table in this package. I think there’s a fantastic performance potential here.”

We have to ask about your new team-mate – everyone is very excited to see the two of you together!
Colin is going to be a real pain this season because he’s going to be fast, and that’s exactly what we want! Let’s not forget Aron, he’s not going to be slow either and he knows the car already. I’m used to having strong competition in my team. In many ways Colin’s experience in rear-wheel drive could bring something fresh to the table which would be fantastic, and I think this year is going to be ace!

“It’s what everyone wants, there’s going to be fireworks! We’ve got ten days of testing booked, which is a sign of massive commitment from Warren. When good engineers get involved they want to spend money to build performance into the cars, and Warren isn’t holding them back. We’ve been in the wind tunnel, there’s quite a bit going on and we’re going to be a force to be reckoned with.”

Check out this interview with JP at the Team BMR launch courtesy of our colleagues at ITV Sport: