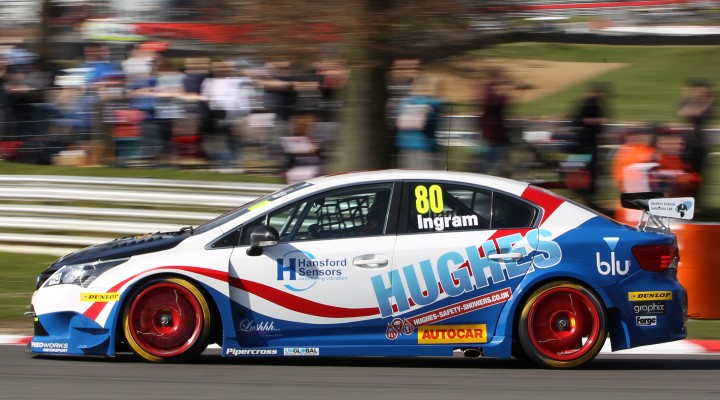 Speedworks Motorsport is heading into the 2015 Dunlop MSA British Touring Car Championship confident about its chances of springing a surprise, after re-signing last year’s leading rookie Tom Ingram for a second consecutive campaign behind the wheel of its heavily revised Toyota Avensis.

Speedworks enters its fifth season in the immensely popular, ITV4 live-televised, all-action BTCC – commonly regarded as the world’s premier and most fiercely-disputed tin-top series – determined to finally claim its long-awaited breakthrough podium finish, after edging consistently closer to the front of the field.

In 2014, KX Akademy graduate and MSA Academy member Ingram qualified the squad’s Hughes Safety Showers-backed Toyota Avensis inside the top ten on the grid for five of the ten meetings – three times inside the top six – and annexed 19 points finishes from 30 starts. Those results earned Speedworks ninth spot in the teams’ standings amongst the 21 high-calibre contenders, and seventh position in the Independents’ Trophy.

An important appointment over the winter months – in the shape of experienced and respected BTCC engineer Geoff Kingston – has prompted a significant overhaul of the Northwich, Cheshire-based outfit’s venerable and trusty Avensis, paving the way for a mood of quiet optimism that 2015 could just be Speedworks’ finest campaign to-date.

“We’re absolutely delighted to have Tom back on-board again!” enthused team principal Christian Dick. “After his standout performance last year, he was always our first choice for 2015 – it’s probably fair to say he outperformed the car’s capabilities on a number of occasions, so hopefully the upgrades we have made to the Avensis for the forthcoming season will allow him to demonstrate his true talent.

“Geoff has wielded considerable influence and has been hard at work bringing improvements to the car in every area, and I think what we have now is a much leaner, meaner fighting machine. We always knew there was plenty of untapped potential in the Avensis and that it was just a question of finding the key to unlock it, which Geoff has helped us to do.

“When you factor in the ongoing support of our loyal partners Hughes Safety Showers and Motul, there is an overwhelming feeling of excitement and anticipation at Speedworks right now. With so many driver and car changes up-and-down the grid, there is the sense that we have a genuine opportunity to really make an impression in 2015 – and that is precisely what we intend to do!”

“I’m over-the-moon to be returning to the BTCC this season, and thrilled to be doing so with Speedworks,” echoed 21-year-old Ingram, who was recently reconfirmed as a British Racing Drivers’ Club (BRDC) SuperStar. “The Speedworks guys are a fantastic bunch and I established a great relationship with them last year, and although we did talk to other teams over the off-season, Christian made a very compelling argument to stay!

“In a championship as competitive as this, being able to rely upon that prior knowledge and stability is unquestionably an advantage, and having seen the modifications that Geoff has made to the Avensis, I can’t wait to get out there and put it through its paces on the track.

“It’s too early to set any solid goals just yet, but with the experience of my rookie year under my belt, I definitely want to be moving forward and scoring some consistent top six finishes in 2015 – and if we can do that, hopefully mine and Speedworks’ first BTCC podium won’t be too far away…”