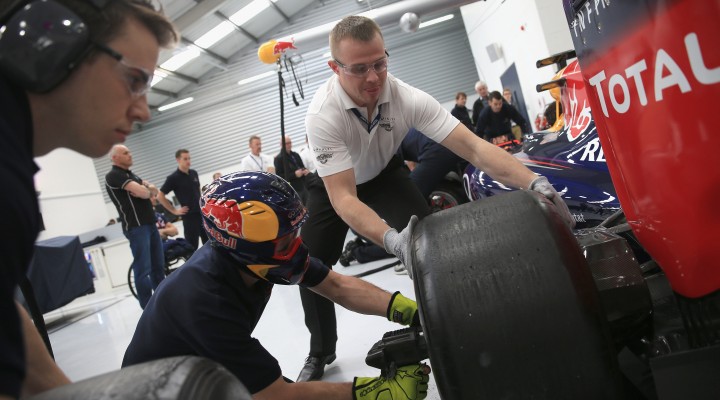 The new Dunlop MSA British Touring Car Championship team, Infiniti Support Our Paras Racing, took the opportunity to learn from the masters in motorsport today by spending time with the Infiniti Red Bull Racing F1™ team at its factory in Milton Keynes.

In preparation for the season opener at the beginning of April at Brands Hatch, ISOPR, based at Mallory Park, Leicestershire, made the short trip to Milton Keynes to see how Infiniti Red Bull Racing work and prepare for F1™ races. The team had the behind-the-scenes tour and met staff from various departments, with an emphasis on race prep.
And in addition to spending time with the Red Bull F1 pitcrew — which showed the ISOPR team how crucial meticulous teamwork is in Red Bull being able to replace four wheels on an F1 car in under 3secs — the Paras had a session in the Red Bull gym.

The guys were shown a series of exercises — all adapted to cope with their numerous injuries — to help them maintain a high level of fitness for the challenging 10-weekend, 30-race BTCC season.

“It is great having the BTCC team, Infiniti Support Our Paras Racing, at our factory and using the similarities between the two teams as an opportunity to learn,” said Infiniti Red Bull Racing team manager Jonathan Wheatley.

“It is great seeing the motivation of the BTCC Infiniti Support Our Paras Racing team and how they work together. Hopefully the day has given them a good insight to the Infiniti Red Bull Racing factory and how we go about starting the season.”

ISOPR’s program for the year involves training their rookie crew not only for the specific mechanical jobs associated with running a professional motorsports team, but also the environment around it: the logistics, the forward planning, even the mundane-but-vital details like keeping everyone fed, rested and fit. Coming to the factory was designed to give them a few things to think about ahead of the season.

“I had to keep pinching myself today,” said former paratrooper Mike Lewis, injured by an IED in Afghanistan after two deployments in Iraq. “I’ve watched the Infiniti Red Bull Racing guys change tyres on the Formula One car for years on the TV, and today I not only watched them in action, but worked alongside them.

“It’s been a privilege. These guys are the best at what they do: of that there is no question. Sure, we don’t need to carry out pit-stops in the BTCC, but we’ve all learned so much today about how important it is to work as a unit, and as a team.

“We also spent time in the Red Bull gym, where we received a number of exercise tips aimed at ensuring we become some of the fittest guys in our paddock. Overall it’s been a wonderful experience, and to get a glimpse inside the secret workings of Infiniti Red Bull Racing will certainly fuel us towards making an impact in the BTCC.”

“This has been a once in a lifetime opportunity not just for the Paras, but for any team on the BTCC grid,” Palmer said. “It’s clear, just having spoken with the guys, that they’ve taken a huge amount from the time they’ve spent working with the Infiniti Red Bull Racing crew, who I need to thank for giving us this unique opportunity.

“F1 is the pinnacle of global motorsport, and Red Bull won the Manufacturers’ World Championship for four successive seasons, so they clearly are the benchmark in the sport.

“We may be coming into the BTCC as newcomers, but we are definitely prepared for the challenges which we’ll understandably face in our first season. And there’s no question that the guys are even better prepared now having spent time to the Infiniti Red Bull Racing crew.”

The BTCC team, who will be driving Infiniti Q50s in the Championship, have been entered with the aim of raising awareness and funds for Support Our Paras, the official charity of the Britain Army’s iconic Parachute Regiment.
The team are employing injured paratroopers to prepare the cars, and have a long-term goal of eventually training an injured paratrooper to compete behind the wheel.