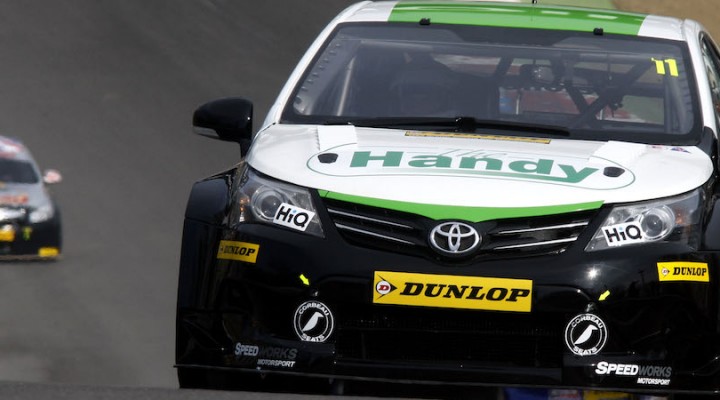 Dunlop MSA British Touring Car Championship team Handy Motorsport has announced a new headline sponsor for its sophomore season with Webb Garden Power Equipment, one of the fastest growing brands in its sector, substantially increasing its support for 2015.

The news comes after Belcher and his squad completed an extensive pre-season testing programme at Silverstone, Rockingham, Brands Hatch, Snetterton and Donington, with new engineer Geoff Kingston reportedly bringing major improvements to the set-up of the Avensis.

Having been part of driver Simon Belcher’s sponsorship portfolio last year during his maiden season in the BTCC, Webb Garden Power will now be the prominent brand displayed on the Swindon racer’s Toyota Avensis – having been featured on the rear bumper last season.

Belcher’s long-standing backer KÄRCHER, a key commercial partner for his motorsport career since 2004, still remains on board for the coming season but is relocating its presence on the car and the team livery as a whole in order to help Handy Motorsport realise a long-term future in the BTCC.

“We’re obviously delighted Webb Garden Power Equipment is going to be our headline sponsor for 2015”, said Belcher, “It’s absolutely fantastic the brand is ramping up its support ahead of our second season in the BTCC – arguably the best shop window in British motorsport.

“Central to this whole deal is the unstinting support of KÄRCHER, which remains a major part of our portfolio and part of our plans for the team going forward. As well as thanking Webb Garden Power for its additional backing, we also need to say a big thank you to KÄRCHER for making the space available. Rotating sponsors on key areas of the car is important for our vision going forward.”

Webb Garden Power Equipment is certainly no stranger to motorsport sponsorship, having featured on Dave Newsham’s Vauxhall Vectra in the BTCC in 2012. Increasing its presence with Belcher for the new season, Webb is utilising its involvement in the championship to drive brand awareness during a year in which Handy Motorsport is focused on making significant progress.

More updates will come from the team ahead of the championship curtain-raiser at Brands Hatch Indy Circuit, but for the annual Season Launch at Donington Park next Tuesday, 24th March, the Toyota will run with an interim spec.