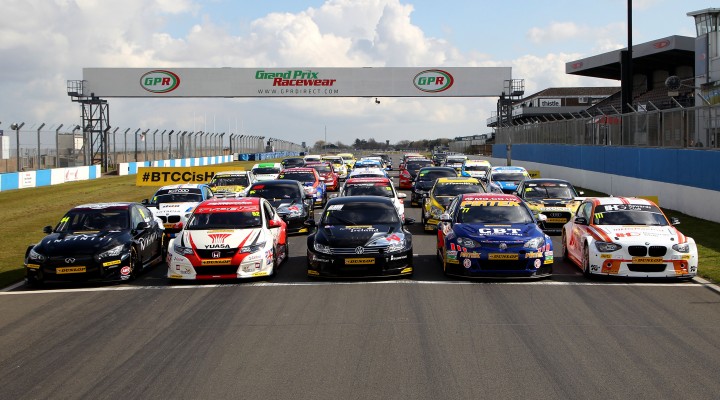 One of the most unpredictable Dunlop MSA British Touring Car Championship seasons ever is set to roar into life next weekend (4/5 April) at Brands Hatch in Kent. With almost all of the championship front-runners having switched teams or cars during the off-season, the biggest prize in UK motor sport is all to play for.

A full entry of 32 cars was announced at the Season Launch earlier this week, and the hundreds of thousands of spectators who will head to the trackside over the 2015 campaign are certain to see another spectacular set of BTCC battles between now and the season finale on the Brands Hatch Grand Prix Circuit in October.

An impressive myriad of 13 different models of car representing 11 of the world’s best known and biggest car manufacturers will go all out for glory over 30 races, with five former champions and a further seven race winning drivers sure to be leading the pack.

The BTCC is set to receive more television coverage around the world than ever before in 2015. All the racing action will once again be broadcast live and in high definition in the UK on free-to-air ITV4 HD. Along with extensive highlights on both ITV and ITV4, the BTCC has also inked an impressive new broadcast deal with CBS Sports Network in North America that will see all the action beamed to 60 million homes and available on demand in the region for the first time. What’s more, CBSSN has awarded a prime time slot on Wednesday evenings for the highlights programme.

Talking point: Roll the dice
The off-season shuffle of teams and drivers has this year created even more of a stir than usual. Almost all of the leading drivers have switched teams, and perhaps most sensationally the top two drivers from last year – Colin Turkington and Jason Plato – have signed to race as stable-mates at Team BMR. With the pair having set the pace at the only official pre-season test at Donington Park, their VW CCs will certainly be in the mix once racing commences.

Last year’s manufacturer champions MG enter the fray with two new drivers. Young gun Jack Goff will line up alongside 2013 champion Andrew Jordan, who is hoping a move to the Triple Eight Racing-run squad will give him the best chance of lifting the championship trophy for a second time.

Honda Yuasa Racing sensationally unveiled the brand new Civic Type R at the recent Season Launch, with its experienced campaigners Matt Neal and Gordon Shedden amongst the few title contenders to remain with their 2014 team. With the race car hitting the track long before the production model hits the road, the BTCC is the only place in the UK to see arguably the most eagerly anticipated car of the year in action.

An all-new manufacturer joins the UK’s premier motor sport series for the coming season, as premium Japanese marque Infiniti enters the fray with its impressive Q50 model. In partnership with the charity Support Our Paras, Infiniti Support Our Parars Racing takes to the circuit both to compete at the highest level and raise support for injured soldiers – several of whom now have key roles within the team itself.

West Surrey Racing has two new drivers alongside team stalwart Rob Collard in 2015, as rising star Sam Tordoff is brought in alongside stellar signing Andy Priaulx. The triple World Touring Car Champion is behind the wheel of the car that won every championship possible in 2014, so expect to see him at the front before long.

Racing to inspire:
Another major talking point in the build up to Brands Hatch has been the announcement that Nicolas Hamilton will become the first disabled driver to race in the BTCC. Brother of reigning Formula 1 World Champion Lewis, Nicolas has previously raced on the TOCA package in the Renault UK Clio Cup, but this season will compete as a guest entry from Croft onwards in an Audi S3 Saloon run by AmDTuning.com

Local Heroes:
Champion squad West Surrey Racing has three new-look BMW 125i M Sport machines to bring to Brands Hatch over the Easter weekend. Collard and Tordoff will run under the Team JCT600 with GardX banner and touring car legend Priaulx will race for Team IHG Rewards Club. The triple world champion said: “The Indy Circuit is incredibly challenging, but I love Brands Hatch – I just can’t wait to get started.”

AmDTuning.com is fielding the reigning champion of one of the BTCC’s most popular support series – the Renault UK Clio Cup – as Mike Bushell takes to the wheel of its Ford Focus. The Thurrock-based squad achieved its first ever podium at Knockhill last season, and with Bushell also being a local racer from Kent, both driver and team will be hoping for home success.

Dartford-based RCIB Insurance Racing returns to the grid this season with Kieran Gallagher piloting its sole Toyota Avensis. The Scottish driver made his debut for the team in 2013 at Knockhill, and he now returns to contest his first full season in the BTCC.

Timetable and tickets:
The first three BTCC races of the year will take place on Sunday 5 April, with the entire race day being broadcast live and in high definition on ITV4 from 10:30am. What’s more, ITV will be live from Brands Hatch for an extra half hour on Sunday to give even more time for pre and post-race analysis of what’s going to be a fascinating curtain raiser. Circuit commentary and live timing from every session will be available on the btcc.net Live Zone throughout the weekend.

In addition to the BTCC, the support series on the TOCA package are set to bring even more action to the fans at Brands Hatch. The new-for-2015 MSA Formula has attracted plenty of attention since it launched at the Silverstone round of the BTCC last season. Sportscar racing fans will get their fix with races from the Michelin Ginetta GT4 Supercup, Porsche Carrera Cup GB and KICK Start Energy Ginetta Junior Championship, whilst the Renault UK Clio Cup – often seen as a stepping-stone to reaching the BTCC – will also feature on the huge bill of British racing.

Tickets for the Dunlop MSA British Touring Car Championship season-opener at Brands Hatch on 4/5 April are available from £26, with free entry for children aged 12 and under. For more information call 0843 453 9000 or visit www.brandshatch.co.uk. All admission includes access to Sunday’s lunchtime autograph session with the BTCC drivers in the pit lane as well as free parking.