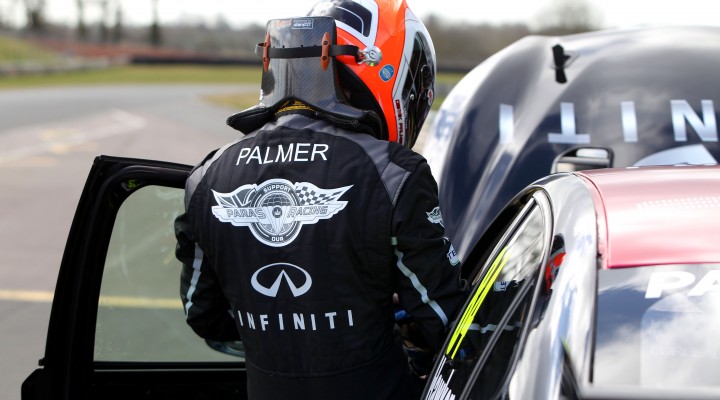 Derek Palmer, who successfully debuted the car during testing earlier this week, will drive the Infiniti Support Our Paras Racing NGTC Infiniti Q50 in the opening triple-header at Brands Hatch this weekend.

Having not been able to test the car at Mallory Park earlier this week due to technical issues, Richard Hawken will sit out the season opener. The decision was taken following discussions involving team management and both drivers.

Following Brands Hatch, Hawken will resume a normal testing program ahead of his debut in one of the team’s two cars at the next round Donington Park on April 18/19.

“The natural route to take was to put Derek in the car, as he’d has the experience of driving one of the cars earlier this week at Mallory,” team principal Derek Palmer Snr said. “Richard will be in the team’s second car at Donington.”

Realistically, how big is the step up to BTCC?
“I think the answer to this question is, it’s a big step up, not just for me but for the whole team. I’ve raced all over the world in many forms of car, but there is nothing quite as competitive as the BTCC.

“And for the guys as well, this is a completely new challenge to them, a new form of combat if you will. But this is something we have taken on willingly, knowing full well what and who we are up against. And believe me, we’re more than up to the challenge. I’m just excited to get started and to work with the guys.

What would qualify as a good weekend for you and the team?
“Realistically, three finishes would be fantastic. We want to ensure we maximise the opportunity to learn about the car and what we have underneath us, and how to utilise it as best we can.

“It’s the BTCC and you can never predict how it’s going to go, so I’ll just go out there and do the best job I can and let’s see where we end up.

“This is the first step on a very big adventure for the whole team and I’m just so excited to get out in the first Free Practice session on Saturday morning.”

Richard Hawken:
How disappointed are you not to be racing this weekend?
“Naturally I’m disappointed to not be behind the wheel at the season opener.

“Having not driven the car yet due to technical issues faced earlier this week, and the BTCC a championship rarely being kind to the unprepared driver, I’ll now learn from the data we will collect over the weekend and head to Donington in a stronger position in two weeks’ time.”

But you’ll be cheering the team, and Derek from the garage?
“We’ve already come so far as a team in a relatively short space of time. The Paras, as we expected, have learned their craft fast.

“It’s just amazing how they’ve switched their expertise from ‘rifle to ratchet’, testament to the continued training they receive at ISOPR HQ.

“I for one, along with many of our sponsors present at the weekend, will be cheering both the Paras and Derek Jnr on from the pit wall as he debuts the first of our stunning Q50 BTCC racers.”