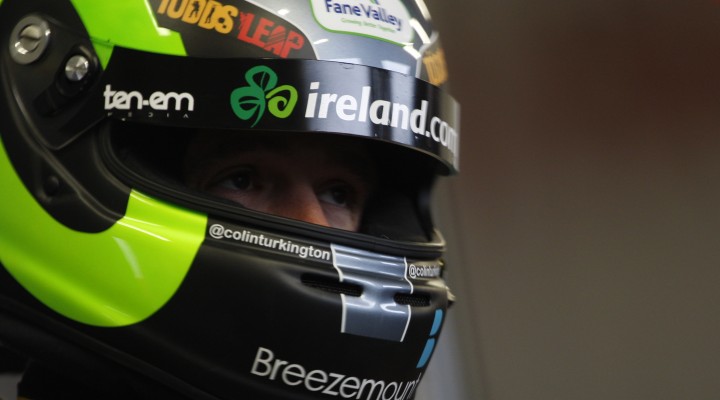 Reigning Dunlop MSA British Touring Car Champion Colin Turkington has fired out a warning ahead of qualifying by setting the quickest time in the final moments of Free Practice 2 at Brands Hatch.

The Ulsterman was languishing down the order for much of the session but produced a last gasp qualifying simulation run, which was good enough to pip WSR’s Andy Prilaux and the sister VW of Aron Smith.

“We’re making steady progress but with a mixed session like that it’s hard to tell exactly where everyone is on pace,” he said. “We had a few issues with the car throughout the session which means I’ve really only done about seven laps today on full attack mode.
“There’s definitely more to be gained but I’m pleased that the car now feels like mine – it’s natural to drive which is what we’ve been working towards. I had a half-spin at the end of the session – I was testing my limit for qualifying and found it. It’s good to put a marker in the sand though, in more ways than one!”
Team BMR’s VW quartet were quick throughout the 40 minutes of running with Smith leading his more experienced team-mates until late on. Plato then took over at the top in the final five minutes before being trumped by both Turkington and Priaulx. Smith fought back to set his own best time on the final tour with the Irishman pushing Plato down to fourth in the process.

The 1-3-4 finish for VW was slightly marred when Team Boss Warren Scott crashed on the exit of Paddock Hill Bend late on.

Adam Morgan’s promising pre-season performances have led many to suggest the Lancastrian could mount his own championship challenge and he completed the top six order in the WIX Racing Mercedes.

Jack Goff provided some respite for MG with seventh while Andrew Jordan continued to focus on race set-up for the manufacturer squad.

Gordon Shedden and Matt Neal were eighth and tenth respectively with the Exocet AlcoSense Audi of Rob Austin between the two Honda Civic Type Rs in ninth.