Goff on top at MG 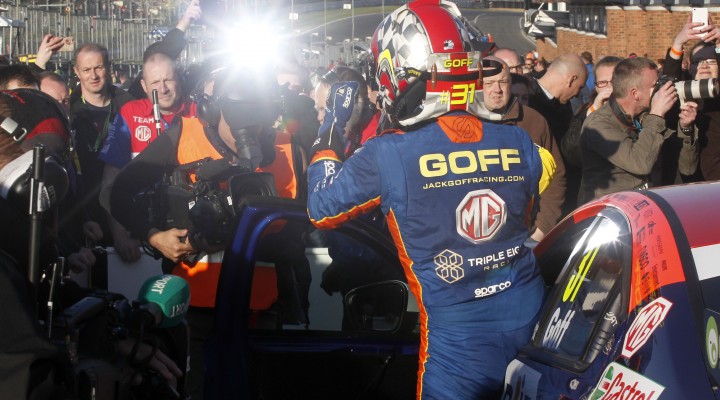 MG Triple Eight Racing celebrated its first podium of the season at the opening weekend of the 2015 Dunlop MSA British Touring Car Championship, and left Brands Hatch with Jack Goff tied at the top of the standings with Honda’s Matt Neal.

Progressing significantly after a low-key qualifying performance, the MG factory team showed flashes of brilliance during Sunday’s three Easter races, with Goff taking a popular second-place finish in the final race of the weekend, preceded by fourth and ninth place finishes.

Andrew Jordan worked tirelessly on his own MG debut and was almost rewarded with a third place in race three, but contact with Rob Austin’s Audi would end his challenge.

Goff began the season opener in sixth with team-mate Jordan back in tenth, although both MGs looked to have the race pace to challenge further up the order.

The first race took place mid-morning and both drivers made up places on the opening lap, with Goff up to fifth and Jordan eighth.

That’s how it stayed until race leader Andy Priaulx dropped back after his Dunlop Sport Maxx soft tyres reached their peak. Goff, also on the soft variant, passed his rival on lap 16 and Jordan managed to do the same four laps later. Both drivers battled hard for their respective positions with Goff fending off the attentions of former BTCC champions Colin Turkington and Gordon Shedden on the last lap.

With both drivers on the hard compound tyres for race two, the team opted for a more aggressive setup to provide them both with added grip. The changes worked and provided the MG pair with a raceier challenger.  New for 2015, race two start positions would be decided based on the fastest laps set in race one.

Goff, starting seventh and Jordan again tenth, made solid starts, but were quickly in heated battles for position. After following Rob Collard’s BMW out of Druids on lap four, Goff did the same into Graham Hill Bend, only to collide with Aron Smith’s Volkswagen dropping both drivers down the order and outside of the top-ten.

Jordan benefited from his team-mate’s misfortune and moved up to sixth, a position he held until lap 21 when he moved up to fifth after race leader Jason Plato crashed out with a puncture. Goff collected himself after his run-in with Smith and similarly profited from Plato’s misfortune, finishing ninth, with Jordan a solid fifth.

The reverse grid race once again provided thrills and spills, and with Goff starting from the front row alongside pole-man Rob Austin, it looked like the 2012 Clio Cup GB Champion would get a serious opportunity to challenge for a second BTCC podium and perhaps a maiden BTCC victory.

After a sluggish start and a five-lap safety car period, Goff set about challenging Matt Neal for second. With Austin leading the race, the pair rallied and got onto the tail of the Audi driver, battling for over half the race for the overall lead.

Jordan started sixth and by the halfway point of the race had moved up to fourth after a meaty battle with Tom Ingram’s Toyota while defending from Adam Morgan’s Mercedes, and a close scrap with Sam Tordoff’s BMW, setting the fastest lap of the race on his way.

The MG pair remained around 1.5-2s apart over the final laps, until Goff made a move on Austin who was left reeling from Neal’s overtake for the lead. Jordan subsequently saw an opportunity too and went for the inside of Austin at McLaren, only for the pair to have contact. The clash saw Andrew’s MG suffer a front left puncture and the Red Bull-backed driver got the MG into the pits to have a new wheel fitted; he re-joined quickly and finished 19th.

“It was a frustrating weekend, but there are positives to take away,” claimed Pirtek-backed Jordan. “The car had very good race pace in the final race, and it was the first time today we’ve been able to make progress. The car was up on its toes and felt alive, whereas earlier it didn’t, but it should’ve been a result at the end of it.”

With just a handful of laps left, Goff harried and hassled Neal’s new Honda Civic Type R and tried to force a mistake from his more experienced rival. The pair got close on several occasions and even a strong run out of Clearways on the last lap wasn’t enough to secure a maiden BTCC win.

“I wanted a podium coming into this weekend, whether I thought I’d get a podium, I’m not too sure,” said Goff. “It’s nice to get it done and out of the way in the first weekend. We weren’t quite close enough for a win today, but now we’re in a good position for Donington.

“We’re on the front foot and the back foot in some respects, we go into qualifying with a big lump of success ballast in the car and it will hurt us, but hopefully we’ll be good enough for a top seven or eight qualifying. But, we’ll drag it around and see what type of result we can get. We’ve got areas we need to improve, and we need to get to a point where both Andrew and I are challenging for pole and for wins on a regular basis. What this weekend has shown is that you really need to keep it clean and keep on top of the twists that the success ballast provides.”