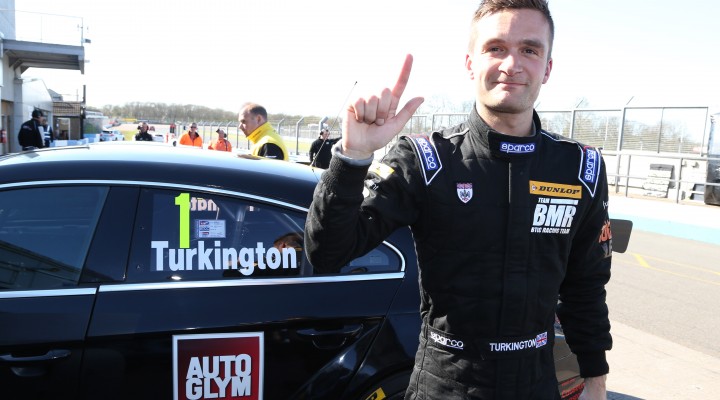 With his VW CC team-mate Jason Plato having dominated proceedings throughout practice it had seemed like a foregone conclusion going into qualifying, but Britain’s premier series delivered yet again with unrivalled drama and level of competition.

Despite leading for much of the session Plato eventually succumbed to Turkington’s stunner and further surprise was to follow when Honda’s Gordon Shedden snatched second in the closing moments.

It was a fight for pole position that will live long in the memory with the top three seemingly in a different league to the chasing pack. And so it proved as Turkington scooped top spot by just 0.056s, with just 0.069s separating Shedden and Plato behind him.

WIX Racing’s Adam Morgan claimed ‘best of the rest’ honours with fourth ahead of Andrew Jordan’s MG. 2013 champion Jordan experienced an indifferent session with with two separate spins at the Old Hairpin blotting his copybook. It proved to be a problem area for the Triple Eight squad as Jordan’s team-mate and joint championship leader, Jack Goff, also endured a spin at the same corner. Goff could only manage 13th in his ballast-laden MG6.

Power Maxed Racing enjoyed its best ever session in the BTCC with the Chevrolets continuing to show much improved pace. Rookie sensation Josh Cook grabbed sixth for the team while race-winning team-mate Dave Newsham rounded out the top ten.

Sandwiched between the yellow American machines were three drivers who will be pleased with their respective performances. Matt Neal will start tomorrow’s opener from seventh after an impressive lap in the Honda Civic Type R, despite his car carrying the maximum ballast. Sam Tordoff proved to be the quickest BMW on-track in eighth, whilst his two more experienced WSR team-mates endured nightmare sessions. Rob Collard could only manage 19th and Brands Hatch pole sitter Andy Priaulx will start 23rd on the grid after his BMW retired with a mechanical problem early in the session.

Aiden Moffat made it two Mercedes’ in the top ten with a late lap that pushed his Laser Tools Racing A Class into ninth.

Aron Smith will start behind Newsham in 11th after the Irishman was denied a chance of joining the final shootout with Turkington and Co due to a gearbox problem with his VW CC.

All 29 cars made it on to the track, including both of the manufacturer-backed Infiniti Q50s. Daniel Welch’s Proton was the only car not to set a representative lap time and he will start last on the grid for Sunday’s first race.

Colin Turkington said: “We’ve made good progress through the day but it hasn’t been easy. Even going into qualifying we had a bit of an unknown package, but I think we just got the set-up right and I was clear on what I needed to do and where I needed to be strong for the lap. There’s quite a bit of time in me just doing everything right! I still feel like I’m learning a lot and I just put together the lap I needed to. Earlier today I’ve been doing two good sectors and then making a mistake in the third one, so I finally got the time in when it counted and it was a brave lap as well. We’ve shown we have good pace with ballast – it’s there but it shouldn’t affect my performance. We’ve seen in the past that a little bit can help settle the car, but I think the result will come from me managing the car over a race distance – my right foot is more of a concern than the ballast!”

Gordon Shedden said: “It’s good, but I have to give it everything! I wouldn’t have put money on myself to be on the front row today to be honest – we assumed the cars with no ballast would be at the front and two with ballast have locked out the front row! It’s a good effort – everyone is working hard and the car is getting better but she’s still a bit of a handful! It can do the lap time – that’s the major positive – we just need to make it a little easier to drive, it’s super lively to say the least. For tomorrow we’ve got the best place to start, it’s a good clear view into turn one, so we’ll see how it goes. The good thing is if we’ve got that kind of performance in the car with 39kg on board it fills me with confidence for tomorrow. Matt [Neal] has worked really hard through the sessions today and to be seventh with the weight he’s carrying is a cracking lap.”

Jason Plato said: “To be honest we just couldn’t quite get the rhythm going. Lap three or four is where the pace comes, and every time I went into lap three I got traffic and had to back out to find some space. We were just holding on to pole at the start, but we still could’ve been a bit quicker. Then the second run came and I hit traffic again. We put on a new set of fronts, which normally upsets the balance a bit, but I was up on my last lap and I have to take it on the chin – I made a mistake. The pace at the front is quick, and the racing tomorrow is going to be exciting, but this is one of those that got away a bit. To get pole everything has got to go in your favour. The pressure was on and I made a mistake – I’ve only got myself to blame.”

Adam Morgan said: “We had a problem in FP2 and didn’t manage to get a lap time in on fresh tyres so we had a bit of an unknown going into qualifying. We made a few changes, found the sweet spot and managed to hook up a good lap. I think our race pace is stronger than our qualifying, so fingers crossed we should be alright. We’re up there with the front runners, so hopefully we can get through the first few corners and laps cleanly and latch on to the front group. I’ll be giving it my everything to get a podium – I think race one is my best chance.”