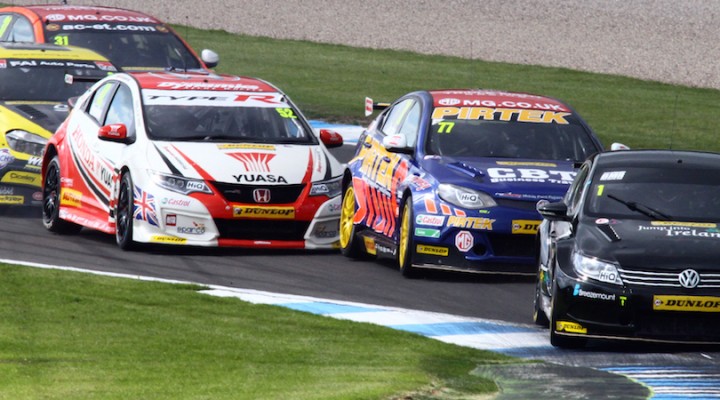 The three most successful drivers in the Dunlop MSA British Touring Car Championship field took a win apiece in a thrilling triple-header at Donington Park on Sunday (19 April).

With seven drivers’ championships between them it was the class of Jason Plato, Colin Turkington and Matt Neal that rose to the surface on a brilliant day of racing in Leicestershire.

He immediately blasted by Gordon Shedden’s Honda Civic Type R off the line and had enough grunt in his VW CC to be nudging the sister car of Turkington into the first corner. Reigning champ Turkington held on for much of the opening lap but eventually had to give way to Plato on the run to the final chicane. Plato powered away by more than a second before sustaining the gap for the remainder of the race.

Attention turned to the battle for second which resulted in some epic mid-race action. After trading places, Shedden’s Honda slid slightly wide at Redgate on lap seven and Turkington promptly angled his VW down the inside of the Japanese machine. The Ulsterman only held the position for a split second, however, as his Honda rival fought back brilliantly by returning the favour on the run to the Craner Curves.

The Scotsman managed to keep the #1 car at a relative arm’s length until the finish and celebrated second by also setting the fastest lap. The new lap record holder would now start race two from pole position ahead of Turkington.

Team BMR’s Turkington made it by the pole-sitting machine of Shedden on lap one, and although the pair scrapped ruthlessly early on, the VW eventually pulled away to take a comfortable victory. WIX Racing’s Adam Morgan took his first podium of the season to complete the rostrum.

Such has been the competitiveness to the start of the 2015 BTCC season that Turkington became the fifth different driver to win in the opening five rounds.

It was to be Matt Neal who earned bragging rights as the first double victor of the year after he came out on top of a relentless multi-car battle in the final bout.

Power Maxed Racing’s impressive rookie Josh Cook started the race from pole position and despite losing out off the line to Rob Collard’s BMW, he soon re-passed and did an absolutely stellar job at the front for the first few laps, but his hard work was soon to be undone.

The race was neutralised on lap six when Sam Tordoff’s BMW and Jack Goff’s MG had a coming together at the final chicane. Both cars were fired off into the gravel and out of the race with the Safety Car being deployed to allow marshals to retrieve both stricken vehicles. This eroded Cook’s lead and set up a spectacular end to the day.

There were changes aplenty behind as Plato’s VW, Jordan’s MG and the Mercedes of Morgan tussled in the early stages.

Aron Smith had already blazed a trail from 12th on the grid up to third prior to the incident and was into second shortly after the restart. He immediately reeled in the race-leading Chevrolet of Cook ahead of him which led to a pulsating scrap over the following few tours. The pair touched through the ultra fast Craner Curves and both cars bounced across the grass in dramatic fashion. The wild sliding VW of Smith made it back onto the track right amongst the chasing pack while Cook rejoined behind them. It was an incredible escape for both drivers but the episode left Collard out front.

Neal, who had already clashed with Jordan’s MG at the Old Hairpin, hauled in the WSR car and squeezed his Honda into the lead with just two laps to go. Jordan made it through too and he was eventually sandwiched between two Hondas as Shedden made the last step on the podium after his own stellar drive from 14th on the grid.

Collard claimed fourth ahead of an incredible drive from teenager Aiden Moffat. Not only did the Mercedes youngster make the most of the incidents ahead of him but he also made impressive late moves by previous race leaders Smith and Cook. Despite his dramas, Cook takes the lead in the Jack Sears Trophy table.

Neal leads the standings by two points from Turkington, with Shedden a further five points adrift in third. Honda takes the lead in the manufacturer/constructor standings, while Team BMR head the teams’ table.

The championship now heads to Thruxton in Hampshire on 9/10 May.

Matt Neal said: “It was certainly all going off in that one right from start to finish! I’m over the moon – another win for the Type R is brilliant, and Flash getting onto the podium too is even better. It was pretty slippy out there especially at the start and end of the race, but the car was so quick through the fast stuff it was really a case of hanging on and making the moves wherever you could. It’s all a bit of a blur at the moment, but the results are fantastic for the team. Every new track is an adventure but historically the Civic loves Thruxton, so we always look forward to going there. We’re on the charge now!”

Colin Turkington said: “That win means a lot – there have been some big changes for me over the winter, so to bring the #1 car onto the top step of the podium for the first time is very special. The team has given me a fantastic car, but like I’ve said before I’m learning all the time and I’m sure there is a bit more to come.”

Gordon Shedden said: “The last race today was a little chaotic to say the least – I don’t know how we all managed to miss Aron Smith coming down the Craners. It was all happening today that’s for sure. We took advantage of the things that came our way and the car was good. That last race was the first time we had no weight on the car this weekend and it was flying. We’ll be carrying quite a bit of ballast to Thruxton but the car goes well there so fingers crossed for more podiums and wins!”

Andrew Jordan said: “It’s a cracking result to score my first podium of the year in the MG. I’m so happy for the team, and though I think we could have had a win, it’s just one of those things and that’s the BTCC. It means we’re going to Thruxton on a high and I’m going to be trying to break my record and get a fourth consecutive pole position. We’ve really made some positive progress over the weekend – Brands Hatch was really tough but I feel like I’ve clicked with the team and we’ll be on a roll from now on.”

Jason Plato said: “I’m pretty pleased with the weekend on the whole. We took back quite a few of the points we lost with the puncture at Brands Hatch and won a race, which is always nice. I’ve made a couple of errors this weekend – I made a mistake in qualifying that cost us pole, and in race two I had a senior moment and didn’t have the car in gear when the lights went out at the start. That probably cost us a podium which is a bit of a shame, but from a team perspective it’s been brilliant.”

Audio from the Top Five

Warren Scott was given a verbal warning for an incident

Andy Priaulx was given a £500 fine

Adam Morgan was given a verbal warning

Mike Bushell was given three points on his racing licence for an incident involving Dave Newsham. He will serve a five place grid penalty at the next event

Matt Neal was given a verbal warning for an incident involving Andrew Jordan. The decision was appealed by Triple Eight Racing which will be heard at the next event

Gordon Shedden was given a £500 fine and three points on his racing licence for setting his fastest lap under yellow flag conditions. He therefore does not score the championship point for setting the fastest overall lap