Jason Plato scores his first win of the season 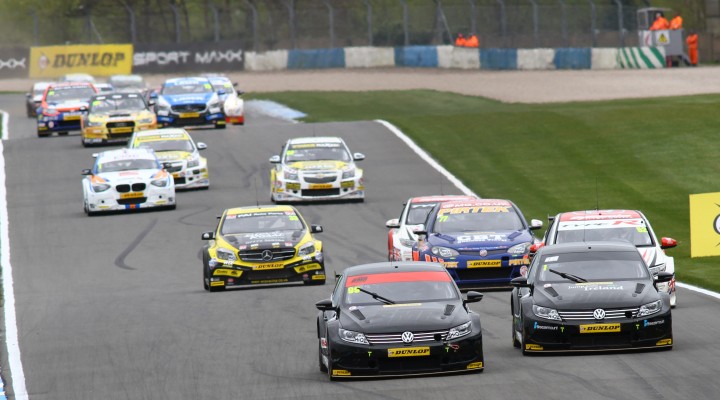 Team BMR’s Jason Plato has taken his first win of the BTCC season after completing an early dash by team-mate Colin Turkington and Honda’s Gordon Shedden.

Left slightly disappointed that he couldn’t convert his superior practice pace into pole position during qualifying yesterday, Plato wasted little time in reaching the summit in race one at Donington Park.

He immediately blasted by Shedden’s Civic Type R off the line and had enough grunt in his VW CC to be nudging the sister car of Turkington into Redgate for the first time. The reigning champion held on for much of the opening lap but eventually had to give way to the ballast-free car of Plato on the run down to the Esses. Plato scampered away by more than a second before sustaining the gap for the remainder of the race.

“We really needed that,” said Plato. “Yesterday was a bit of a disappointment so I was fired up to get into the lead as fast as I could. I’m really pleased – this is for Warren [Scott] and everyone at Team BMR who’ve put in so much effort. I think Colin knew I was feisty at the start but it’s a great result for the team to have two cars on the podium. I turned the taps down a lap early trying to set a time for race two – I thought we’d done enough but even though we’re not on the front row we know our car is good with weight on so it’s all to play for.”

Attention turned to the battle for second, which resulted in some epic mid-race action. Shedden’s Honda slid slightly wide at Redgate on lap seven and Turkington promptly angled his VW down the inside of the Japanese machine. Turkington only held the position for a split second, however, as Shedden fought back brilliantly by returning the favour on the run to the Craner Curves.

“I really enjoyed that race,” enthused Turkington. “Obviously it’s better to win, but I’m still learning how hard I can push with this car at every circuit. At Brands Hatch I overstepped the mark on cold tyres, so I erred on the side of caution. I’m really pleased for Team BMR to have two podiums though. Gordon [Shedden] and I were very evenly matched on pace, but the progress I’m making is good – I drove better in that race than in any of the races at Brands. It’s good to be starting on the front row for race two.”

Shedden managed to keep Turkington at a relative arms length until the finish and celebrated second by also setting the fastest lap. The new lap record holder will now start race two from pole position alongside Turkington, with Plato on row two.

“It was good – a great race with Colin [Turkington] all the way through,” said the Scotsman. “Everyone at Honda has done a great job on this new Type R, it’s getting better all the time. Colin and I were quick at different parts of the lap which made for some good clean racing. With the ambient temperatures being low, everyone was moving around a bit more and I saw the opportunity at Old Hairpin. To start at the front for race two is ideal, but there’s lots of different variables in tyre choice and ballast all around us. Hopefully we can learn something from Matt’s race on the softs.”

MG’s Andrew Jordan claimed a lonely fourth position after getting by Adam Morgan’s Mercedes on the opening lap. Morgan’s race got worse before it got better as he dropped down the order on lap three after running wide. The BTCC race winner recovered well, however, to eventually finish ninth as well setting the third fastest lap time meaning he will start alongside Plato in the next bout.

There were brilliant performances aplenty in the lower end of the top ten as WSR’s Sam Tordoff battled to hard earned fifth place. His BMW 125i M Sport team-mate Rob Collard arguably performed even better having made several eye-catching moves to claim eighth despite having started way down in 19th.

The impressive Power Maxed Racing Chevrolet of Dave Newsham took sixth as he saw off the early challenge from team-mate Josh Cook.