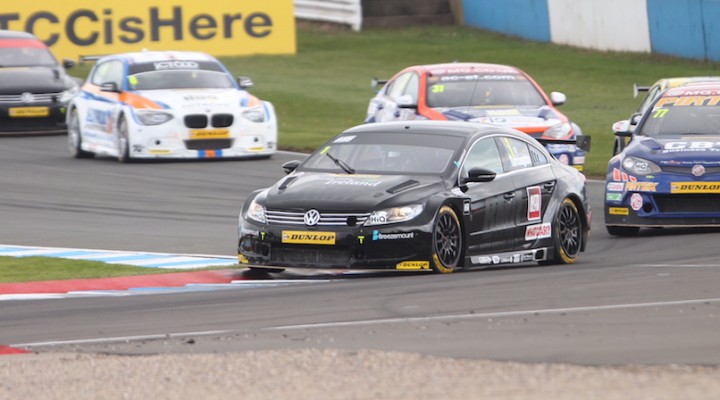 Colin Turkington has continued his championship defence in fine style by taking a near lights-to-flag victory in race two at Donington Park.

Turkington’s VW made it by the pole-sitting machine of Gordon Shedden on the opening lap, and although the pair scrapped relentlessly early on, the VW eventually pulled away to take a comfortable victory.

Such has been the competitiveness to the start of the 2015 Dunlop MSA British Touring Car Championship that Turkington becomes the fifth different driver to win in the opening five rounds.

The battle behind the Ulsterman was far from straight forward as a number of drivers held second at different stages of the race. Honda’s Matt Neal won the war after scrapping his way from seventh on the grid, underlining his own impressive start to the campaign.

The telling moment came on lap 14 when Neal’s Civic Type R and the Mercedes of Adam Morgan went side-by-side on the exit of the Esses. Morgan’s A-Class bounced across the grass as Andrew Jordan eyed his own opportunity in the Pirtek MG. Morgan lost out and Jordan briefly tucked into second, albeit with a slight touch to Neal’s Honda. Triple champ Neal replied instantly to grab the position back into Redgate before pulling away to take second.

WIX Racing’s Morgan wouldn’t be denied his podium after further contact with Jordan’s MG at the Craner Curves saw the latter’s car slide luridly sideways. The 2013 champion recovered to finish fourth ahead of the battling VW of Jason Plato.

The fight for sixth went down to the wire with Rob Collard’s BMW crossing the line 0.009s ahead of Josh Cook’s Chevrolet. It was a sensational climax to the race with Cook’s consolation being pole position for this afternoon’s finale, having been chosen at random during the reverse grid draw live on ITV4. Triple Eight’s Jack Goff took eighth ahead of the WSR duo of Sam Tordoff and Andy Priaulx.

There was a brief safety car period early on when the Ford Focus of Alex Martin made heavy contact with the VW CC of Warren Scott, sending the Team BMR boss into the gravel and out of the race.

Turkington now leads the championship by 14 points from both Neal and Goff. Shedden is a further two points back with Plato another two clicks adrift. MG lead the Manufacturer/Constructor standings with Team BMR heading the teams table.

Click here to view the full classification from Race Two.