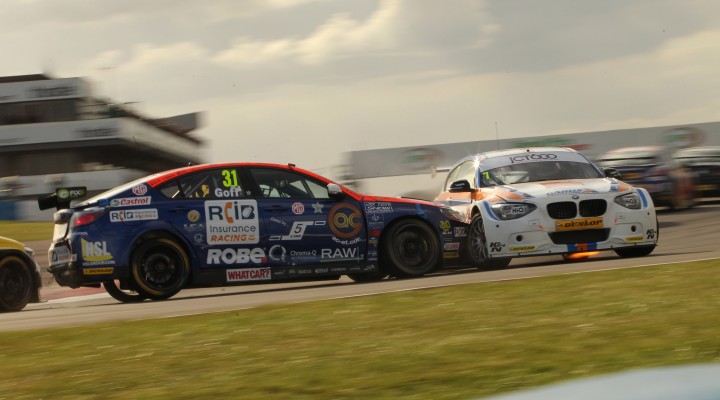 The West Surrey Racing-trio arrived in Leicestershire in buoyant having taken pole position, a race win and a further podium from the Brands Hatch curtain raiser.

Tordoff was the fastest BMW driver during free practice at Donington and he backed up that form by setting the best lap time of the WSR-run trio during qualifying. The young gun would start Sunday’s opening race from seventh on the grid but Collard and Priaulx would have it all to do from way down in 19th and 23rd respectively – the latter having his session ruined by a fuel pressure problem.

Priaulx immediately set about carving his way through the order in the first bout, however, making a number of eye-catching passes and eventually finishing the race in a points scoring 12th position.

Both JCT600/GardX-backed drivers produced great performances in race one too, with Tordoff making his way up to fifth while Collard improved his position to eighth by the finish.

A trio of top tens followed in race two with Collard’s exciting sixth place being the standout result – eventually crossing the line just 0.009s ahead of Josh Cook’s Chevrolet in a sensational photo finish.

While keen to fight their way through to the upper reaches of the top six in the finale, disaster struck for Priaulx and Tordoff when both BMWs were forced out of contention after contact with other drivers during separate incidents.

“It has been a frustrating weekend for a number of reasons,” said Priaulx. “Everyone at Team IHG® Rewards Club and WSR has worked tirelessly but it has just been one of those weekends. Our race pace was OK and despite the disappointment of qualifying we were gradually making our way towards the front in the first two races.”

It was also a frustrating end to an otherwise productive day for the talented Tordoff.

“I suppose I come away from Donington Park with mixed emotions,” he said. “I was the fastest BMW driver in qualifying and kicking off race day with a top five result was a good solid start. I had to battle hard for another top ten in race two but then our fortunes began to change. It’s frustrating but there are some positives that we can take into the rest of the season.”

Team-mate Collard fared much better in race three as he became embroiled in one of the most memorable scraps in BTCC history. He blasted into the lead off the line before being re-passed by Cook shortly after. Places were swapped regularly among the top six and Collard again found himself in the lead with just two laps remaining.

Collard was the only front-runner who was using the Dunlop soft tyre in the final race and he eventually had to settle for fourth when the performance in his rubber dropped. Far from downbeat, Collard had produced the best performance of any driver using that compound across all three races on the day.

“Qualifying was disappointing but we showed we had good race pace and was able to work our way towards the front throughout the day,” concluded the multiple race winner. “Race 1 was fun as I made lots of passes to make my way up to eighth, and we showed similar form to grab sixth in the next one. Race three was one of the most exciting and dramatic races to be involved in. We could have won but it could have also been a lot worse as there was just so much going on. To get fourth with the soft tyre was a great result.”

The result helped to push Collard up to seventh in the overall standings with Priaulx and Tordoff in tenth and eleventh respectively. West Surrey Racing remains third in the Manufacturer/Contructor championship.