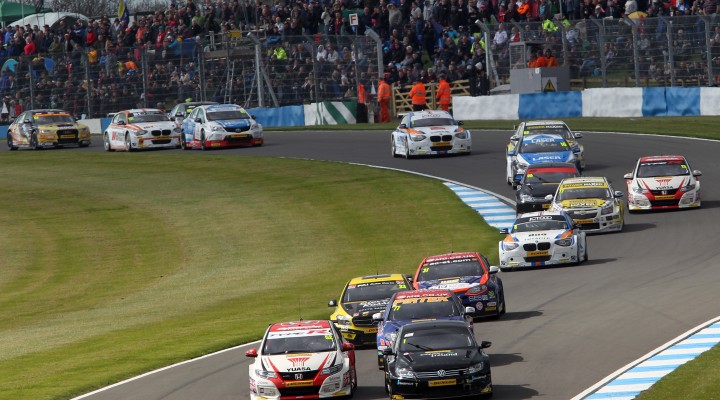 Thruxton Circuit in Hampshire will host rounds 7, 8 and 9 of the 2015 Dunlop MSA British Touring Car Championship next weekend (9/10 May) with Britain’s most popular cars and stars taking on the fastest track in the country.

Nearly 30 of the finest touring car drivers will be chasing glory around the 2.34-miles of abrasive asphalt, featuring some of the fastest corners on earth, in what is shaping up to be one of the most open BTCC seasons in history.

Triple champion Matt Neal leads the way after six of 30 races but the fiercely fought campaign has already seen five drivers reach the top step of the rostrum. Honda’s Neal is the only double race winner so far, but that doesn’t even begin to cover the story of what has widely been regarded as an unrivalled and action packed opening to the championship.

Parts of the south west are currently basking in footballing glory, thanks in particular to the exploits of Southampton and Bournemouth, but at the end of a long, hard season local sports fans can finally come together to cheer on their home grown racing talent – see later in the story.

It’s anyone’s guess as to whether one of the local lads can scoop the honours in Hampshire next weekend, but that’s the beauty of the BTCC at Thruxton – it’ll be unpredictable no-holds-barred racing where fortune often favours the brave but where the courageous can also be caught out.

With a huge crowd expected at the Andover circuit, Thruxton will boast the region’s biggest sporting event over the 9/10 May weekend, and it’s sure to be a thriller.

Story so far: Champions to the fore
Despite the ultra competitiveness in the BTCC the cream always rises to the top in Britain’s biggest and best motor sport series. So it has seemingly proved with its five former champions already occupying the top five positions in the standings.

It is far from being a closed shop, however, with at least another six challengers close behind – all of whom have won races in the BTCC. What’s more, in the opening two events of the season the series has produced some of the closest and fiercely fought racing ever seen.

Rob Collard claimed victory in the curtain raiser for reigning champion squad West Surrey Racing, which kicked off three unforgettable races at Brands Hatch. The winning margins for all three contests in Kent were less than half a second with Shedden and Neal also tasting champagne after similarly titanic tussles to Collard’s triumph.

Despite BMW and Honda sharing the honours on the opening weekend, it would be the turn of VW to set the pace at Donington Park in the next encounters.

New team-mates Plato and Turkington took a win apiece for the fledgling Team BMR squad before one of the best races in years brought proceedings to a close in Leicestershire.

Several lead changes and bumper-to-bumper racing eventually saw the experienced Neal come out on top of the six-car melee for victory, hence his position at the top of the standings.

Talking Point: Honda’s home advantage
With its office headquarters in Bracknell and main production factory in Swindon, Thruxton is the home event for Honda UK, and judging by its results there it would seem that home advantage counts for the manufacturer giant.

The last eight races at the Hampshire venue have been won by Honda machinery in what can only be described as dominant form. Gordon Shedden has taken four of those victories since 2012 while team-mate Matt Neal has won three, with the only anomaly being Andrew Jordan who won in the independent-run Honda last season.

Jordan is arguably the man to throw a chink of light to the chasing pack, however, as he has since moved on to pastures new with British marque MG. The 25-year-old will be going for a fourth successive pole position at the circuit next weekend and his MG6 is a proven front-runner.

Thruxton is one of only two circuits that the manufacturer is yet to win at since its return to the series in 2012, but in Jordan it has a real hope of ending that record this time around. Jack Goff has been every bit as fast as his more experienced team-mate too, and he’ll also fancy his chances of securing a first victory for MG.

The dark horses – quite literally in their stealth looking VWs – will be champion team-mates Colin Turkington and Jason Plato. The Team BMR cars have arguably been the quickest machines on-track so far this season and with the pair still acclimatising to new surroundings you’d expect them to continue that upward trend as the season progresses. With Irishman Aron Smith improving all the time in the third VW don’t be surprised to see a trio of the German machines in contention for victory.

West Surrey Racing remains this year’s unknown quantity, which seems incredible when you consider the squad won a sensational four titles in 2014. Two thirds of its driver line-up has changed for this year, with champion Turkington heading for a new challenge, plus the team still seems to be searching for outright speed in its BMW 125i M Sports. WSR did however win the opening race of the campaign and is a world class operation that will undoubtedly get things right, but it remains to be seen if Thruxton will be the place for them to do it.

Local Lights: Five look to thrive in front of Thruxton faithful
No fewer than five British Touring Car Championship drivers will head to Thruxton next weekend looking to benefit from home support.

Hampshire’s Rob Collard is the standout name among the local contenders, having won multiple races in the country’s toughest championship. The experienced racer claimed victory in the first race of 2015 too, underlining his ambition to challenge for the title this season. Incredibly his son – Ricky – will also be on the bill at Thruxton, with the youngster contesting the supporting MSA Formula races.

The rookie name on everyone’s lips this season is Josh Cook, particularly after the young gun challenged for outright victory last time out at Donington. The Bath-based talent is looking every bit a future BTCC race winner and there will be wild scenes if it happens at Thruxton next weekend.

The new manufacturer-backed Infiniti squad boasts Richard Hawken in its ranks while Swindon’s Simon Belcher will be hoping for a better return to the fastest track in the country having suffered a big accident there last season.

Welch Motorsport’s Daniel Welch is another who’ll be banking on home support, but after a problematic start to the season he’ll be also be hoping for a trouble free weekend in Hampshire.

Dorset’s Alex Martin unfortunately misses out as he’s due to undergo back surgery early next week but there is one other feel good ‘home story’ ahead of the event.

Guernseyman Andy Priaulx returns to BTCC action in 2015 having been racing around the globe for much of the last decade. While the triple World Champion is still quite some distance from his Channel Island home – including nearly 100 miles of English Channel – the touring car legend will be racing as close to his front door as possible, so it’s likely we’ll see the Andy Priaulx fan club out in force in Hampshire!

Timetable and ticket information
Beyond the BTCC, a packed weekend programme will include plenty of action in the support series, comprising the Ginetta GT4 SuperCup, Ginetta Junior Championship, Renault UK Clio Cup and MSA Formula – the proving ground for Formula 1 stars of the future. What’s more, spectators won’t miss a second of the excitement courtesy of big screens at the Complex and Club Chicane – the circuit’s two principal viewing spots.