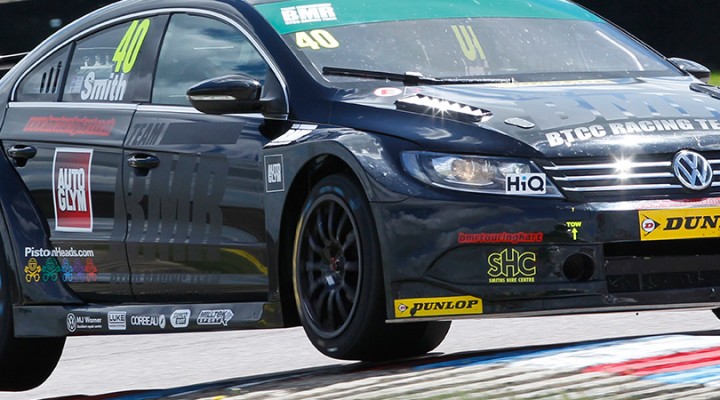 The lap set by the VW was enough to halt Honda’s charge to a front row clean sweep with Gordon Shedden and Matt Neal missing out by an incredibly close 0.020s and 0.073s respectively. The gaps throughout the order were extremely tight with the top 16 cars separated by less than a second.

The truncated session was punctuated by two accidents and a number of fastest laps which were subsequently removed by the stewards for track limit infringements.

The first of those incidents involved the Ford Focus of Mike Bushell and Toyota Avensis of Simon Belcher, which led to high speed contact. The two cars touched as Bushell’s AmD machine left the pitlane with Belcher coming past on another timed flyer – both cars had nowhere to go and left the circuit before hitting the barrier with some force.

A lengthy stoppage followed to remove the stricken cars and repair the barriers, but more importantly to allow the medical team to attend to the drivers. Unfortunately for Bushell he looks to have suffered severe ligament damage and has been taken to nearby Southampton General Hospital. It should be noted that Mike was conscious and fully responsive following the incident and is due to be released later this evening.

A further accident involving the Audi A4 of Hunter Abbott stopped the session for a second time late on, which came at a time of high drama.

Shedden held provisional pole position for a brief period before Adam Morgan’s Mercedes and Dave Newsham’s Chevrolet both got the jump on the Honda. Incredibly all three cars – plus several others – had their respective lap times removed after jumping across the kerbs at the final chicane. This put Neal back in charge but there was still just enough time for a flurry of changes to occur in the top order.

It was Smith’s moment to emerge from the shadow of his two champion team-mates and the BTCC race-winner duly obliged with a stellar lap to take a maiden pole position. Shedden eventually made it into second ahead of Neal, while Morgan did well to immediately bounce back from his discounted lap with another tour that left him in fourth.

Andy Priaulx continued his and West Surrey Racing’s productive day with fifth place on the grid – the Guernseyman believing he has a much better race car than his one-lap pace showed. This should bode well for the triple World Champion and will also provide encouragement to his WSR team-mates Rob Collard and Sam Tordoff, who will start tenth and 12th respectively.

Jason Plato still seemed to be suffering from the after effects of his earlier accident, which forced him to miss most of Free Practice Two, but he responded well to claim a well earned third row berth for tomorrow’s opener. Reigning champion Colin Turkington could only manage ninth in the identical Team BMR VW.

Jack Goff got the better of his MG Triple Eight Racing stablemate Andrew Jordan by claiming seventh – the latter having to settle for 11th, ending an impressive run of three successive pole positions at Thruxton. Top rookie Josh Cook remained exactly that as he grabbed eighth.

Aron Smith said: “I certainly am over the moon with that. I thought I was going to do a 1:16.8s, but Jason [Plato] played the team game and gave me a bit of an extra tow so I was able to go a tenth quicker than I thought I would. It’s something I’ve always wanted to achieve – a British Touring Car pole has always been on my to-do list! It’s great to be able to prove that in qualifying trim, when everyone is at the top of their game, we can still be the quickest. We did the job – it’s back to back poles for Team BMR at the last two events which is a great credit to the team. I want three good results, I’m sure the guys around will race fair – I just want to get my head down and drive off into the distance. I think we have a fair chance, Saturday is always the hardest day of the weekend so to come out on top is brilliant. We’re in really good shape for the races too with less ballast on board compared to the cars around us.”

Gordon Shedden said: “I’m very happy with that – two front rows in a row! To keep the momentum up from Donington is great, especially with a lot of ballast in the car. Thruxton is a good hunting ground for me, but Aron [Smith] alongside me is a good 40kgs lighter than I am which is going to make a difference, he should have a clean run. Having said that, you’ve got to get to the chequered flag – we’ve worked really hard not just on getting the car right for qualifying but getting the balance right for race trim. Hopefully the homework pays off and we have a car that’s strong over the race distance. There will be a lot of people in the mix tomorrow – this year we’ve seen how many swings and roundabouts a weekend can throw at us, and the unique challenges of Thruxton should make it even more unpredictable!”

Matt Neal said: “That was a great session – I’m really chuffed to have two cars in the top three. The target for me in qualifying today was sixth, so I’m really pleased to be starting on row two tomorrow. The Honda Civic Type R is awesome through the quick stuff which is what this place is all about. Thankfully for me the weight doesn’t hurt so much around here as it does at other circuits, so I’m pretty confident for tomorrow.”

Adam Morgan said: “Absolutely chuffed to bits with that. It was a bit rushed and a bit last minute – I remember doing the first quick lap and my engineer came on the radio to say it was pole, then a few corners later he told me it was disallowed! Even still, the car felt really good and I was able to get another fast one in. We slipped down a bit to P4 but still really happy with it. I was pushing really hard – we could have done with a bit more grip on the rear, but that’s part of it around Thruxton, it’s a bit loose, but that’s one of the best things about coming here! The Hondas ahead are quick, but we’ll see how the weight affects their tyres throughout the race, so the plan is to still be with them at the end and see what happens!”

Andy Priaulx said: “I’m really happy with that. We said anything around eighth place would be mega so I’m pleased with P5. The car was good – we also had a mega slipstream, it was a bit of an opportunistic one, but I couldn’t have been in a better position to benefit from it in the final sector. My turn one wasn’t perfect but the rest of the lap was spot-on, I hit all my points and I got the time. It makes me even more optimistic for tomorrow. We haven’t got a lot of weight on board, but we shouldn’t get ahead of ourselves – we know that this track is going to be one of the hardest for us. The Hondas ahead are carrying a lot of ballast which could affect them, but for me I’ve just got to score the points that I missed out on at Donington Park.”

Click here for the final classification of Qualifying for Round 7 of the 2015 Dunlop MSA British Touring Car Championship.