Shedden tops table after race-winning spoils are shared at Thruxton 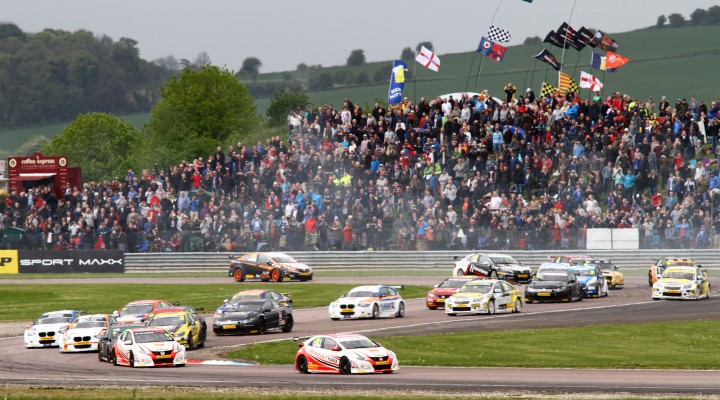 Shedden showed his class by heading home a Honda one-two in Sunday’s opener, continuing the success story for the Japanese manufacturer at the fastest circuit in the country.

The Scotsman got the jump by the pole-sitting VW of Team BMR’s Aron Smith and never looked back as he pulled away from the chasing pack, maintaining the lead for the remainder of the race.

Neal also nipped by the slow-starting Smith and despite coming under race-long pressure he was eventually able to secure a hard-earned second place finish. The result for the new Civic Type R was the eighth victory for Honda machinery in the last nine races at Thruxton, which has impressively spanned three models of car.

Morgan claimed another eye-catching podium ahead of Plato, the latter having cleanly picked his way through from sixth on the grid.

Honda’s dominant reign came to an end in race two when Plato came out on top of a classic joust with West Surrey Racing’s Rob Collard. Plato’s VW initially lost out to the rear-wheel drive BMW but the double champion quickly reeled him in and made his move at the end of lap two.

The duelling duo couldn’t be separated for the duration of the contest with Collard hounding the stealth black machine ahead of him for every fiercely fought lap. Plato produced a defensive masterclass, however, and he held on to take the win – his 90th career victory in the series. Shedden completed the podium positions to score yet more valuable championship points.

Morgan then secured a stellar second BTCC career victory with a flawless drive in the final race.

Starting from pole position the WIX Racing Mercedes immediately pulled away from the field and was more than three seconds up the road by mid-distance. He had to hold his nerve after a brief safety car period, but the young talent was again able to peg back the field following the restart.

Despite it being his second victory having won on the final day of the 2014 season at Brands Hatch, it was the first time the Lancastrian had actually stood on the top step of the podium. His maiden triumph effectively came in the stewards room when first-on-the-road driver Plato was penalised for a driving standards infringement. So despite this result representing his second success, it will undoubtedly have tasted sweeter than the first.

MG Triple Eight Racing’s Andrew Jordan maintained his championship challenge with a second place finish behind Morgan’s Mercedes. While the 25-year-old is still looking for his first win of 2015, he has shown the sort of consistency that could prove vital over the course of a season and that which took him to title glory in 2013.

Sam Tordoff scored his first podium since making the switch to West Surrey Racing, after he had to defend from the team’s former driver Colin Turkington. Reigning champion Turkington experienced a relatively low-key weekend in Hampshire, but the Ulsterman still bagged a solid points haul in every race.

Honda Yuasa Racing made the most gains during the final race with Shedden and Neal finishing in fifth and sixth respectively.

The fallout from Hampshire sees the championship picture tantalisingly poised with five former champions occupying the top five positions. Shedden leads Turkington by eight points, with Neal, Plato and Jordan next up in the order.

Honda holds the advantage from reigning title holders MG in the Manufacturers/Constructors Championship while Team BMR maintains its lead in the Teams’ standings. Turkington and Team BMR head the Independents’ tables, and Power Maxed Racing’s Josh Cook is the Jack Sears Trophy leader, which is open to rookie competitors.

Rounds 10, 11 and 12 of the Dunlop MSA British Touring Car Championship will take place at Oulton Park in Hampshire in four weeks time (6/7 June).

Gordon Shedden said: “To get another win and one-two with the new Civic Type R is a fantastic feeling. I got a great start so straight away I was in some clear air, which made the all-important job of looking after the tyres quite a bit easier. By the time I was at the Complex for the first time I’d broken the tow, and from then on I could manage the pace – the car was perfect. To get a podium with maximum ballast in race two was awesome – we were really chuffed with that – and to then conclude the weekend with more solid points in race three was a real bonus. As championship leader, I’ll go to Oulton with a whole load of weight in the car, but we’ll worry about that in a little while…”

Jason Plato said: “It was a good weekend overall. After what happened in Free Practice One, it knocked us back a bit and took some of the aggression out of our approach. It’s dead easy now to look back and say I should have pushed a bit harder, but actually it was probably the right thing to do because we got through with a strong haul of points. I don’t know exactly where we were before the weekend, but now we’re just 12 points from the top. That’s progress; we’re getting closer and closer. I’m getting closer to 100 wins! I don’t think I’ll be able to get them all this year, the championship is too competitive, but it’s getting closer. I think we’ll definitely get a few at Oulton – my tail is in the air and there’s nobody faster around that place than me. We’ve got to do our job, stick the car on pole and win the first, and maybe the second race.”

Adam Morgan said: “It’s an incredible feeling – it was great to win at Brands but doing it on the road is another level. I’ve wanted to get a lights-to-flag victory for so long, and to do it around Thruxton is amazing. Thanks to all the guys in the team – the car was brilliant, and while I did have a bit of vibration it made it to the end. It’s been a great day all round – we’re a small team but we have some fantastic backing from the guys at WIX and all our other sponsors and with three podiums this year, we’re getting there. In this championship experience counts for an awful lot, and now I’m in my fourth season everything is coming together and we’re hoping to be right up there in the Independents’ week in week out.”

Matt Neal said: “The Civic Type R lived up to expectations around here for sure. I think we could have had more points out of the weekend, but it’s so close and I had a bit of a mess up in race two which I’ll be thinking about again tomorrow morning. We’ve got to move on and we got good points for me and Flash – we’re both still up there. Race three was busy – I wanted it to carry on, the car still felt great! Oulton is one of the tracks where ballast is really going to hurt, and qualifying is going to be really difficult so the top few guys could find it tough. If we can get a top six it would be a good job. We’re not about having quiet weekends though; we’re flat out for everything we can get. It works well for me and Flash, we work well together and push each other very hard!”

Colin Turkington said: “It was a steady weekend although we struggled a bit for balance. Whenever you qualify back a bit you have to really graft on race day to try and pick up results. We improved the car through all three races and probably scored some OK points. The ballast is going to make things trickier for us at Oulton, as there’s plenty of stopping and starting around there, but it’s points in the bag at this time of the year and hopefully we can bring a stronger package to Oulton.”

Andy Jordan said: “First of all I’d like to say a big congratulations to the WIX guys, I know what it’s like to be in a small team and to win in the BTCC with your family is brilliant. For us it’s been a pretty tough weekend at work. I thought Adam [Morgan] might lose his tyres in the third race – he was setting a very impressive pace and I was on the limit of where the MG felt comfortable so I didn’t push too hard and made sure I’d be there to pick up any pieces. They’ve obviously got the car well sorted though as it made it to the flag. I’m really happy to get the podium – it’s important to keep scoring on our bad days, but we need some good days now too!”