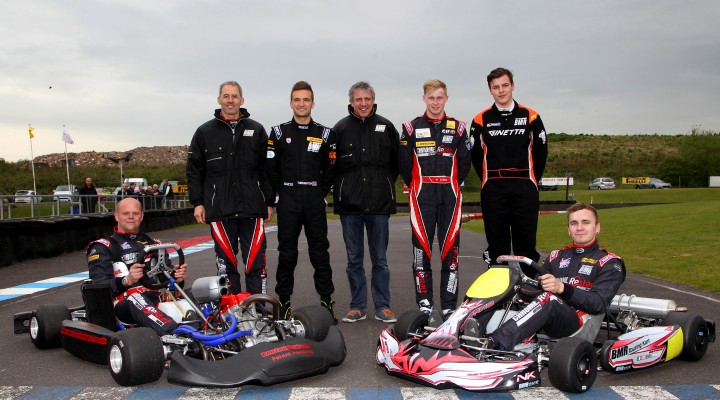 It’s not often we get the chance to share the same ribbon of tarmac as the drivers that we work with in the Dunlop MSA British Touring Car Championship, but that all changed recently when the media team tried out Team BMR’s latest kart creations alongside its roster of racers.

The front-running BTCC squad recently launched an all-encompassing Motor Sport Academy, which is dedicated to supporting youngsters making their way in the sport. Along with its four BTCC drivers the team is also backing Renault UK Clio Cup racer Ashley Sutton and Senna Proctor in Ginetta Juniors. The ambitious plans of Team Principal Warren Scott do not end there, however, as the BMR Touring Kart Programme has been added to the outfit’s ever-growing portfolio.

“I am very excited to launch the BMR Motorsport Academy and Touring Kart programme,” said Scott, who hopes to have a driver rising through the ranks from karting to the BTCC in the next five years. “We as a team are thrilled to be in a position to be able to offer this opportunity to future stars of British motor sport, and we can’t wait to get started.”

Scott’s go-getting manifesto over a five-year term is one that should be taken seriously, considering the substantial achievements already made by his team in a relatively short space of time. Most of Scott’s targets in the BTCC have been met, if not exceeded, and BMR is now considered a genuine championship contender in Britain’s pinnacle motor sport series – not at all bad considering this is only the second full season of competition for the team.

BMR will be running a schedule of one-off karting events later this year, before its official championships commence next season with some of the biggest prizes in motor racing on offer.

The winner of its Junior series will be awarded a drive in the Ginetta Junior Championship, while the Senior champion (for over 15 year-olds) will receive a £50,000 sponsorship package towards their 2017 racing budget in a BMR approved championship.

Arguably its most ambitious creation of the lot is an incredible FWD kart that will also make up a third series, the winner of which will receive a drive in the Renault UK Clio Cup Championship.

BTCC race-winner Aron Smith has been heavily involved in the project over the winter and the Irishman was grinning from ear-to-ear every time he tested one of the machines at Thruxton earlier this month.

“The karts are great and I’m delighted to be involved in the project,” he said. “They’re brilliant fun and enable you to show off your talent, which is the main thing. Even at my career stage, they really help to keep me sharp and fit.”

So what of the karts themselves and the experience required in order to race one of them?

Well, driving a 250cc four-stroke engine that can produce up to 35BHP is not for the feint hearted, but it is completely exhilarating for amateurs and pros alike. The karts are seriously quick but they are fairly forgiving and surprisingly easy to handle around Thruxton’s impressive kart track. A number of those lucky enough to trial the machines only had modest Pro-Kart experience beforehand but most were up to speed soon enough. The biggest attributes required were skill and fitness, which are standout requirements when searching for Britain’s next big star.

With the opportunity available from 12 years upwards there is every chance that Team BMR could be honing the skills of a driver from teenager to touring car star in the next five years. Equally if you’re young and gifted then you may just be the team’s next Jason Plato or Colin Turkington.

Keep in touch with the latest news at www.teambmr.co.uk