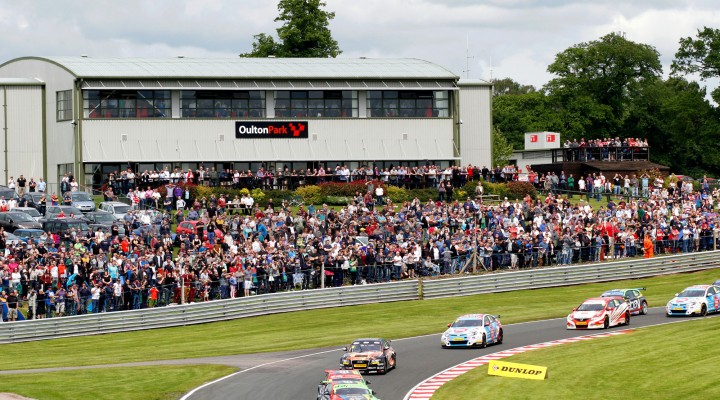 A fantastic Dunlop MSA British Touring Car Championship title fight heads to Oulton Park next month (6/7 June), which is set to the be one of the toughest challenges of the 2015 season for Britain’s biggest car racing championship.

The BTCC is renowned for exciting wheel-to-wheel racing and plenty of panel bashing from the championship‘s larger-than-life characters. With six different winners in the opening nine races, and 16 points covering the top six with a total of 67 on offer, the series’ annual Oulton Park visit is set for plenty more drama and intrigue.

Two wins have propelled Honda’s Gordon Shedden to the top of the championship table, but just eight points separate him from reigning champion Colin Turkington, who won two of the three races at Oulton Park last year. A switch to the BMR team’s VW CC alongside rival Jason Plato and tweaks to the rules mean that the Ulsterman will face stiff competition this time.

The outspoken Plato is also ready to topple Shedden from the top, as is the Scotsman’s Honda team-mate Matt Neal and 2013 champion Andrew Jordan, now racing for MG. Also in the mix is Blackburn’s Adam Morgan, who won the most recent round at Thruxton in his family-run WIX Mercedes A-Class.

“It’s an incredible feeling,” Morgan said after the win, his second in the championship. “Thanks to all the guys in the team, the car was brilliant. We’re a small team but we have some fantastic backing and with three podiums this year, we’re getting there. In this championship experience counts for an awful lot, and now I’m in my fourth season everything is coming together and we’re hoping to be right up there week in, week out.”

There are many more potential race winners in the 29-car pack, including reigning champion team WSR (BMW), where round one winner Rob Collard is joined by Sam Tordoff and triple World Champion Andy Priaulx. Irishman Aron Smith (VW CC), winner of the third race at Oulton Park last year, is also likely to be in the fight.

Oulton Park’s annual BTCC round is traditionally the best-attended of the season, and famous for its party atmosphere, with many fans camping at the picturesque venue. Adding to the fun is a free pitwalk and autograph session on Sunday morning plus a trade village, fun fair and children’s adventure playground.

Discounted tickets for the BTCC at Oulton Park on 6/7 June are available in advance from £26, with free entry for children under 13. For more information call 0843 453 9000 or visit www.oultonpark.co.uk