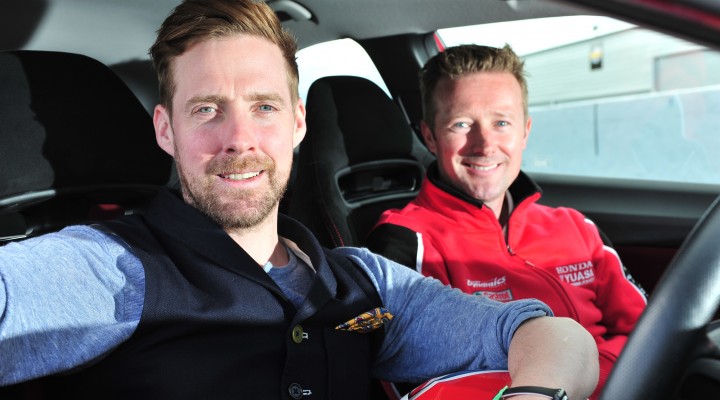 Gordon Shedden has been delivering a ‘star masterclass’ to a new Honda ambassador ahead of the Dunlop MSA British Touring Car Championship’s visit to Croft this weekend (27/28 June).

Ricky Wilson – lead singer of the Kaiser Chiefs and a judge on BBC1’s popular Saturday night talent show The Voice – obtained his National B race licence at Knockhill last week, under the guidance of former BTCC champion Shedden.

Wilson kicks off his ambassadorial role by piloting the new Civic Type R at Goodwood this weekend, the day after Kaiser Chiefs play to 65,000 people in Hyde Park with The Who, whilst Shedden will be wowing the BTCC crowds in the North East.

“Ricky has a natural talent behind the wheel, and we discovered he drove much better when listening to the Kaiser Chiefs when out on the track,” joked Shedden. “His reactions were quick and smooth and I look forward to hearing about his Goodwood experience and living with the car during his time as ambassador.”

Wilson’s debut run at Goodwood will take place alongside BTCC racer Jack Clarke, who was named as part of Honda’s new Driver Development Programme earlier this week. The Chiefs frontman is however ‘nervously confident’ of a successful blast after his recent lesson from former champion Shedden.

“Learning to drive with Flash at Knockhill was an absolute blast and it was incredible seeing how the car handles when driven at speed and what it can do,” said Wilson. “On a serious note, I have learnt an enormous amount of high-performance driving skills from Flash and am nervously confident I can handle the new Civic Type R around the famous hillclimb at Goodwood.”