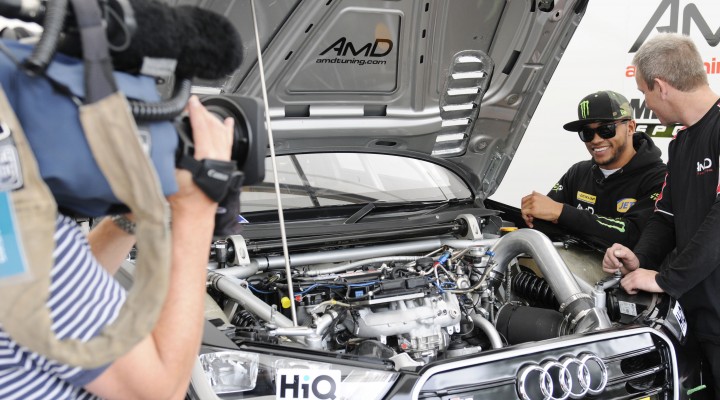 The time has come for Nicolas Hamilton to make his long awaited debut in the Dunlop MSA British Touring Car Championship and there’s been a hive of media activity at Croft today (26 June).

Crews from ITV, BBC, Channel 5, ITN and CNN have all reported on Hamilton’s arrival in the BTCC, plus a number print and radio media have covered his journey to the UK’s premier series.

“I can’t wait,” he said. “This is something I’ve been working towards for the past couple of years. I’ve only had three days in the car so far, but obviously I’m excited – albeit a little bit nervous now too.”

Several journalists are quick to bring his close relationship with brother Lewis to the fore, and the young talent notes the support he receives from the Formula 1 World Champion while also reminding people that this is his time.

“This is a big weekend for me and Lewis has been offering his support and he’s always on the end of the phone if I need him – but most of all, I just need to learn to do it myself,” Nicolas continues.

“I’m incredibly lucky to now have this opportunity. I like to keep myself grounded, although it’s nice to be seen as a role model and to be able to inspire people.”

Becoming the first disabled driver to enter the BTCC – Nicolas suffers from Cerebral Palsy – is a huge achievement in itself but there’s little time to dwell on that as the AmDTuning.com driver now looks to take on the best tin top drivers around.

“I used to play computer games featuring the likes of Jason Plato and Matt Neal, and now I’ll be going up against them for real,” he concluded. “I’m going to use these guys to try and learn as quickly as possible and develop my craft.

“It’s a never-ending learning curve! I’ve got no real expectations as such; I just want to see what happens. I raced at Croft in Clios back in 2011 and it’s a track I enjoy driving – although this is the first time I’ve set eyes on it since!”