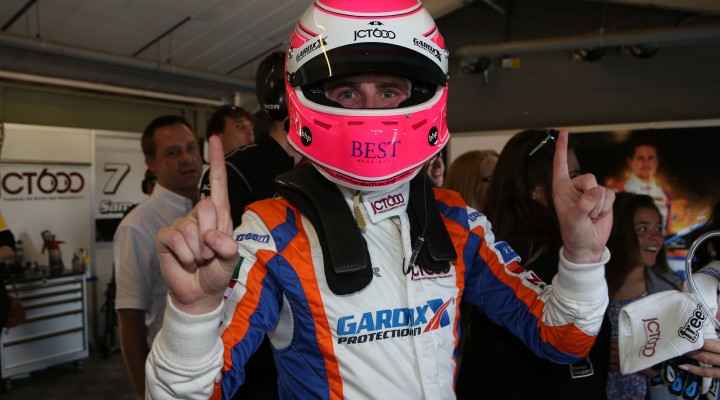 Sam Tordoff has taken pole position for Round 13 of the 2015 Dunlop MSA British Touring Car Championship after topping a memorable duel with his West Surrey Racing team-mate Andy Priaulx at Croft.

All three WSR BMWs were actually in contention for top spot before Rob Collard was eventually squeezed down to fourth by Honda Yuasa Racing’s Gordon Shedden. The Scotsman’s lap was no less impressive than the BMWs ahead of him as the former BTCC champion ran the session with near maximum success ballast in his Civic Type R.

Early pace-setter Colin Turkington had to settle for fifth, bringing his run of four successive pole positions at the North Yorkshire venue to an end. He was, however, the first Team BMR driver on the timesheets with Aron Smith and Jason Plato down in 11th and 12th respectively. It has been a difficult day for championship leader Plato with some mechanical issues blighting his challenge, which culminated in this being the first time he has qualified outside of the top ten since Silverstone in 2006.

The session got off to a disjointed start when Kieran Gallagher’s Toyota Avensis broke down at the final hairpin. Yellow flags waved for much of the opening ten minutes with marshals requiring some clear space in traffic to remove his car. Collard still had time to spin his BMW 125i M Sport wildly at the Complex, although he was able to immediately rejoin the action.

The battle really came to life in the final ten minutes as Tordoff and Priaulx traded blows, which looked to have swung the Guernseyman’s way. Even after Tordoff had set the ultimate pace, Priaulx began hauling his #111 car round for one final crack at grabbing his second pole position of the season. The lap started well with his fastest first sector but he failed to get the rest of the tour together and had to make do with a front-row start alongside Tordoff.

“I might have to close my eyes for the first few laps,” beamed WSR Team Principal Dick Bennetts when realising his trio would be starting tomorrow’s opener from first, second and fourth. They’ll have to look out for Shedden’s striking Civic Type R which seems to be on song at each and every circuit on the calendar, plus there’s a further gaggle of contenders in the chasing pack.

Rob Austin briefly held third but still enjoyed his best qualifying performance of the season with seventh. MG Triple Eight Racing had to make do with eighth and tenth with Jack Goff getting the better of his former champion team-mate Andrew Jordan. It may be a tough race day for the MG6 drivers as they again look to be staring at the potential of consistent finishes rather than showing race winning pace. Adam Morgan’s WIX Racing A-Class was sandwiched between the MGs in ninth.

Sam Tordoff said: “It was really good and we’re on a bit of a roll now after Oulton Park. I’ve got a bit of a spring in my step and I’m getting my head around the new car now. We knew this could be a BMW circuit but that also brings a lot of pressure, so for us all to deliver is extremely satisfying. I’m quite confident about the starts and hopefully I’ll get off the line well and fend off any challenges. This weekend is about making hay while the sun shines and we need to claw back some of that points deficit that we’ve had so far this season.”

Andy Priaulx said: “It was a great fight. I’m really happy but I didn’t quite find the sweet spot on my lap. We’ve shown good pace throughout the day and the points are there to be won tomorrow. I was straight on the pace first thing this morning, despite not having been here for 14 years, so I have to be delighted – it has been a good day for West Surrey Racing.”

Gordon Shedden said: “I was hanging it out on the edge and really pushing. Only Jason Plato has more weight onboard than us and he’s quite far down by his standards. We’re in good shape but we know how quick the BMWs are here, so we’ll have to work hard and grind out some results. Overall I’m really happy and the weather might even throw us a curveball tomorrow.”

Rob Collard said: “The car felt very good today. We knew we would be strong at Croft but it’s fantastic to have three cars on the first two rows. It’s important that we all score good points for the team tomorrow but I’ll looking to get some good results for the drivers’ championship too.”

Colin Turkington said: “The car was really good in qualifying – the best it has been. I was really confident with the car I had beneath me but fifth was the best we could get out of it today. The pressure is on but there’s still an opportunity to move forward tomorrow. I really enjoy driving at Croft and we’ve found a good balance, which were unable to find at Oulton Park. I’m really pleased and we’re looking forward to race day.”

Matt Neal said: “We were targeting the top eight and the top six was a bit of a dream, but now that we’ve got it I’m a little disappointed that we didn’t get even more out of it. I guess lots of guys are saying that though so for us to have both cars in the top six while carrying a lot of weight is very pleasing. We are absolutely on the ragged edge with the car during qualifying but you’ve got to do it to be in the hunt. Rain could be a factor tomorrow but hopefully we should be alright.”

Click here to view the final classification from qualifying at Croft.