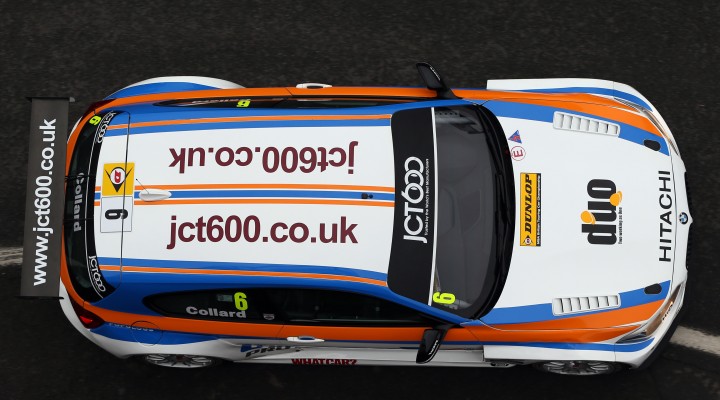 West Surrey Racing has scored an historic hat-trick after Rob Collard backed-up earlier wins for Andy Priaulx and Sam Tordoff by taking victory in the final BTCC contest at Croft.

Collard lost the lead to Honda Yuasa Racing’s Gordon Shedden on the opening lap and had to wait until late on before he could return the favour. Shedden pulled away initially but as his Dunlop SportMaxx soft tyres began to wear he found himself with Collard’s BMW all over the back of his Civic Type R.

The pair had already clashed in race two, where Shedden got the better of Collard in a fight for fifth, but the WSR driver would not be denied this time around. Collard gave Shedden a slight tap in the rear as they made their way round the long right hander on the approach to the chicane on lap 12, which was enough for the BMW 125i M Sport to sneak inside the rival Japanese machine. Collard looked to have completed the move and that was confirmed when Shedden bounced across the grass as he straight-lined the chicane.

Shedden fell into the clutches of Andy Priaulx’s WSR BMW late on and suddenly it was the tussle for second taking centre stage. They were nose-to-tail on the final lap and it was Priaulx who eventually came out on top as he sneaked past on the final hairpin to take second.

Despite being shuffled down the podium order it has still been a successful day for Shedden who now leads the 2015 Dunlop MSA British Touring Car Championship at the midway stage of the season.

Team BMR’s Colin Turington and Jason Plato remained line astern for much of the final race to take fourth and fifth respectively, ahead of Sam Tordoff’s BMW. The race two winner clinched the position late on after he made an almost carbon copy move to that of race-winner Collard on Shedden, but this time it was Tordoff passing the other works Honda of Matt Neal.

Tom Ingram’s Toyota and Jack Goff’s MG relegated Neal further down the order in the closing stages, whilst Team BMR’s Warren Scott rounded out the top ten with his best ever result in the BTCC.