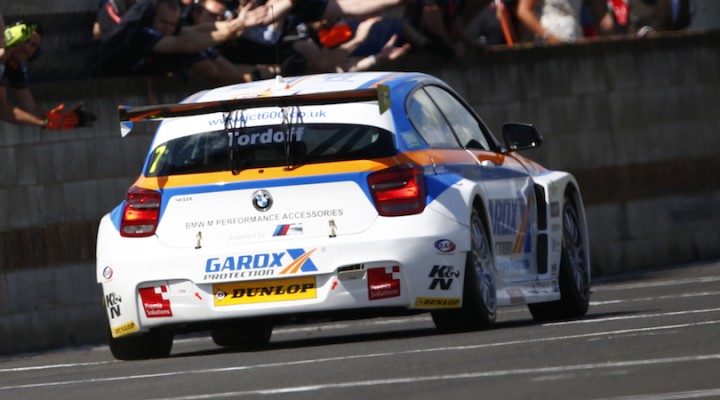 Sam Tordoff bounced back to claim a lights-to-flag victory in the second BTCC encounter at Croft as he dominated proceedings for the 15-lap duration.

Tordoff had looked comfortable in the earlier contest before a small mistake on a greasy surface let his West Surrey Racing team-mate Andy Priaulx past and into first. There would be no such mistake this time around as the Yorkshireman blasted his BMW 125i M Sport off the line before pulling out a gap to the chasing pack.

Priaulx’s attention was taken up by the Team BMR duo of Jason Plato and Colin Turkington, who similarly had to fend off an attack from the fast-starting BMW of Rob Collard. Plato and Turkington tag-teamed Priaux’s Team IHG Rewards car as the VWs nipped by before the former triple World Champion had got enough heat into his Dunlop tyres.

Priaulx was soon on the pace as he set about hounding Plato and Turkington throughout the race but the experienced title winners prevailed.

The fight for fifth was extremely exciting with four cars battling for position. Collard was defending resolutely from standings leader Gordon Shedden before the pair eventually went side-by-side on lap 11. It was a heart stopping moment as the two cars touched at high speed, with Shedden using all of his undoubted talent to maintain control of his Honda Civic Type R while completing the move into fifth.

The scrap had allowed Rob Austin’s Audi A4 and Tom Ingram’s Toyota to join the fray with Collard making contact with the rear of Shedden’s car several times on the exit of the final turn. The four continued to joust until the finish but any chance of a change to the order were largely scuppered by a huge accident for the Chevrolet of Josh Cook, which brought out the yellow flags for the final few laps.

The win for Tordoff fires him into the top five of the drivers’ standings and right into championship contention. Shedden leads the way from Plato and Matt Neal, with Andrew Jordan next up ahead of Tordoff and Turkington.

“I am so happy and we’re on a roll at the moment,” enthused Tordoff. “We hope to get another good result in race three and continue with the momentum. I believe we can be a real force in the second half of the season.”

The final Dunlop MSA British Touring Car Championship race at Croft takes place at 17:05 and will be screened live and exclusively on ITV4 and via itv.com/btcc.