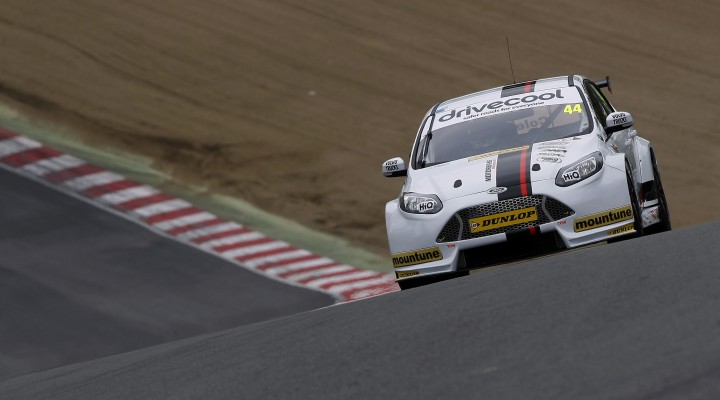 Both Mat Jackson and James Cole were in action with the latter recording the best part of 100 laps round the 1.2-mile Indy circuit. The drive from Motorbase’s headquarters in nearby Wrotham is only a little longer in distance than a lap of the track itself, as the team chose to clock significant mileage at a venue it knows extremely well.

Jackson completed 53 laps in his Ford Focus before he and the team turned its collective attention to building on Cole’s performance. The former Formula Ford champion also loaned his car out to Jackson as part of the process. The pair worked closely on set-up, with Cole’s multiple race winning team-mate circling 19 further times in the #44 machine.

“Both drivers have a similar style, which we’ve never had at Motorbase,” said Team Boss David Bartrum. “That has been a real help, particularly for James, as they can work together on set-up and he can lean on Mat’s wealth of experience. We’ve really put James through his paces and he’s driven very well.”

No official timing was recorded during the open test day, but Bartrum is pleased with the progress made by his team as it continues planning for its intended BTCC comeback at Snetterton next month.

“I don’t want to say too much about our pace as it’s so hard to make predictions when you’re not running with the rest of the field,” he continued. “We believe we’re on the right track and we should be there or thereabouts, but there’s been so many changes in terms of performance from teams this year, that you just wont know for sure.

“Plus of course there’s the soft tyres, added ballast etc. and we’re yet to see how we deliver in full blown competition. We’ve prepared as well as we can and we’re quietly confident – the group test at Snetterton will tell us more.”

Jackson worked solely on honing the outfit’s new-for-2015 engine, which Bartrum is hoping is the final piece in the puzzle. Motorbase has taken race wins and multiple podiums in the NGTC-era, but Bartrum recognises the need to have a consistent front-running car in what is the most competitive championship in the country.

“We’ve always had a good car but never quite the best car,” he said. “We believe the engine was the biggest issue – the old Ford Duratec engine was good but hopefully the new Mountune engine is the missing ingredient. It’s better balanced, more driveable and it delivers steady performance throughout the range, which is why we feel we’ve made a significant step forward. The car is also fine carrying weight and we’ve tested the soft tyre, which has gone well.

“Referring to my earlier point, however, is that we need to find out if our step forward is as big as all the other teams. The BTCC is constantly evolving and if you look at Team BMR and Honda for example, you can see the bar has been raised again this year, plus of course we’ve had WSR bouncing back at Croft. We’re working hard to be there and we’re looking forward to the challenge of mixing it with those guys again.”

With his team sat on the sidelines Bartrum admits it has been difficult to watch the BTCC at times, but he believes they’ve utilised the time well and now it’s full steam ahead focussing on the squad’s return.

“In some ways watching the first half of the season from a bit of a distance gives you a better chance to assess the situation,” he concludes. “Sometimes when you’re there running your team, you’re caught up in the moment, so it has been quite interesting in that respect. “We’ve also got a GT programme so I’ve been busy too, but it is quite tough to watch. We want to be a part of it and we feel that we’ll be competitive.

“Now the Snetterton test will be quite pivotal for us as it’ll be the first chance we’ve had in 2015 to really compare ourselves to the rest. Even then, however, not every team will nail their colours to the mast and show their full potential.

“We ran Nick Tandy in the summer test at Snetterton in 2013 and we believed we had made real progress, and we had, but of course we couldn’t quite tell what everyone else was doing. Even so, the test day in a few weeks gives us our best chance to assess where we are we’re looking forward to it.”

To see Motorbase and a whole host of other BTCC cars testing at Snetterton on Thursday 16th July look out for more information on www.btcc.net next week. Tickets for rounds  16, 17 and 18 of the Dunlop MSA British Touring Car Championship at Snetterton on 8/9 August are available online from £26, with free entry for under-13s. For more information call 0843 453 9000 or click here.