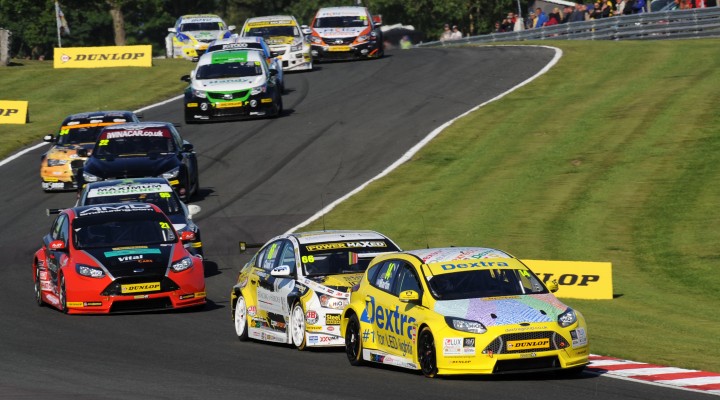 Rookies in the 2015 Dunlop MSA British Touring Car Championship have been fighting wheel-to-wheel over the first half of the year as they bid to become the Jack Sears Trophy Champion.

The Jack Sears Trophy bears the name of the series’ first ever champion, and is now awarded to the best newcomer over the course of the season. The points system works in the same way as the independents’ championships, and at the halfway marker it is Power Maxed Racing’s Josh Cook who leads the way. The top rookie driver over each weekend also receives a Jack Sears Cup.

Chevrolet Cruze driver Cook was runner-up in the supporting Renault UK Clio Cup in 2014 and was always billed to be a front-runner for the Jack Sears Trophy. Indeed in the championship curtain-raiser he laid down a marker by finishing top in the first two races of the year.

It was, however, Mike Bushell who came away from the first weekend as lead rookie. The reigning Clio Cup champion locked horns with Cook on many occasions in one of the most action-packed support series on the BTCC bill, and at the start of the year the pair were once again in competition for top honours. Bushell’s consistency and a DNF for Cook in the final race at Brands Hatch put the AmDtuning.com driver ahead.

Donington Park was to be a different story for Bushell, however, as mechanical issues plagued the Ford Focus all weekend leading to three non-scores on race day. Cook, meanwhile, was in imperious form and impressed everyone with a superb weekend from start to finish.

Sixth place in qualifying put the Bath-based ace in the thick of the action on Sunday, culminating in a thrilling battle for the lead in the third and final encounter. As he went side-by-side with Aron Smith for outright victory, the slightest of touches sent the pair spearing across the grass at Craner Curves. Amazingly both re-joined safely, and although no longer in the hunt for the top step of the podium, Cook maintained his position as best rookie to take a clean sweep of JST wins.

Bushell’s bad luck continued at super-fast Thruxton, as an unfortunate collision with Simon Belcher in qualifying put him out of contention for another three races, and despite three further JST podiums at Oulton Park and Croft he now lies sixth in the rookie standings.

With Cook storming away at the front of the field, a number of new-for-2015 drivers have fought hard in the midfield to try and close the gap as well as win a Jack Sears Trophy Cup or two for being top rookie on each race day.

Stewart Lines lies second at the halfway stage having scored five second places and a third. His consistent performances have seen him rack up the points in the Houseman Racing Toyota, and he is now ten ahead of third placed driver Derek Palmer.

Palmer, who struggled with reliability on his all-new Infiniti Q50 at the start of the year, has rocketed up the order over the past three rounds achieving JST podiums on seven occasions.

Fourth after five events is Dextra Racing newcomer Alex Martin. The former GT racer has scored two rookie wins and five additional podiums and was the Jack Sears Trophy Cup winner at the most recent Croft event. He lies just five points ahead of fifth placed Kieran Gallagher, who had three non-scores at Croft due to mechanical problems on his RCIB Insurance Racing Toyota. Gallagher scored a JST win in race two at Thruxton and will be looking for more progress over the second half of the year.

With the middle order so tightly packed, Cook has what looks like a comfortable lead of 60 points. One poor weekend, however, and his advantage could easily disappear, so be sure to keep an eye on the battle for top rookie as the season resumes at Snetterton on 8/9 August.