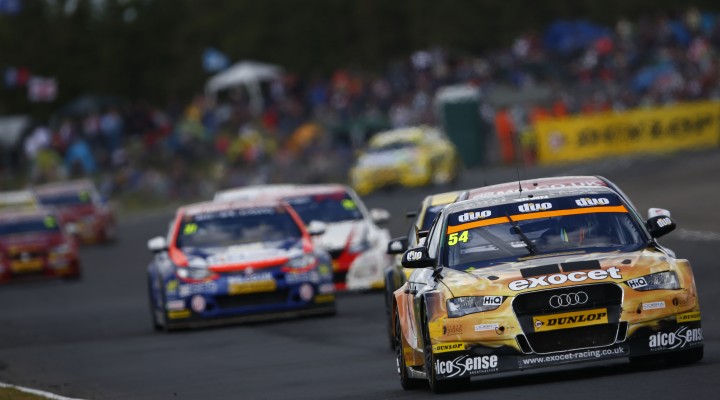 Hunter Abbott was one of 25 drivers blasting round Snetterton during the mid-summer tyre test yesterday (17 July), but his preparations for the second half of the BTCC season will take a completely different twist this weekend.

Abbott will demonstrate his Exocet AlcoSense Audi A4 British Touring Car at Santa Pod’s Bug Jam event – the UK’s biggest gathering of lovers of VW-Audi machinery – on both Saturday and Sunday, with more than 30,000 fans expected to attend.

Rob Austin was the man behind the wheel at last year’s popular event as he took on a souped-up campervan along Santa Pod’s drag strip, a video of which you can watch here.

This time, however, it will be turn of his team-mate Abbott: “This will be like nothing I’ve ever know before but a chance to put on a show with no pressures of a race weekend in front of 35,000 VW-Audi fans sounds awesome,” he said. “I’m looking forward to my first go on a drag strip – just so long as they don’t put me up against the Jet Car that Santa Pod has!

“It’s also a great event for the team to let their hair down and soak up the atmosphere as I hear they did to quite some effect in 2014, plus of course an event like this gives all the team’s partners terrific added exposure beyond that already achieved in the BTCC.”

A spokesman for Santa Pod commented: “We are delighted to welcome Rob Austin Racing back to Bug Jam. Following on from Rob’s success of last year, we look forward to watching Hunter go head to head on the quarter mile and taking on some old-school Vee-Dubs.”