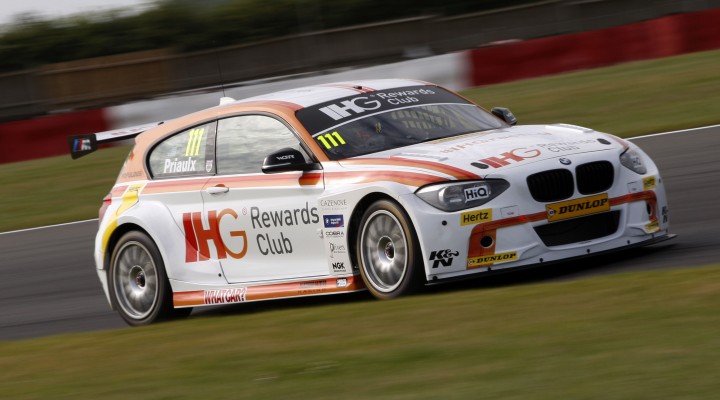 The session had been dominated by the Team BMR VW of Jason Plato, before he was demoted at the chequered flag by Priaulx’s last gasp run.

The West Surrey Racing BMWs had been languishing down the order by their own high standards so it seemed an unlikely outcome, but the talent of triple world champion Priaulx was never in doubt. Celebrating his birthday today, Priaulx exited the pits in the final few minutes and put together an impressive qualifying simulation in the #111 machine.

“We’re very happy with the start to the weekend,” he said. “The grip levels were low at the start of the session, but we stole a nice lap right at the end there. Let’s see if we can carry the momentum through to qualifying – this isn’t one of our strongest circuits but we’ll be trying to get at many points as possible. If there’s a win on the cards we’ll certainly be going for it, but it’s early days yet!”

It was Honda’s Matt Neal who eventually tucked in behind Plato on the timesheets, with Team BMR’s Aron Smith and MG’s Jack Goff in fourth and fifth respectively. Jackson held on to sixth ahead of the ballast-laden Civic Type R of Gordon Shedden.

If the competitiveness and closeness of the session are a signal of the weekend ahead then we look to be in for a cracker. The top three drivers were separated by less than a tenth of a second with just four tenths blanketing the aforementioned top seven.

Two former champions were next up in the order, in the shape of Colin Turkington and Andrew Jordan, but both will need to hang on to the coat tails of those ahead to remain the title contention.

Rob Collard’s WSR BMW rounded out the top ten with the closeness of the order continuing throughout the field. 19 drivers were covered by just over a second with Nic Hamilton falling just outside that bracket in 22nd. It was an encouraging run for Hamilton in his second BTCC event, however, as the Audi A3 driver finished ahead of seven fellow competitors.

Free practice two commences at 12:10 with qualifying taking place at 15:45 this afternoon, with the action being streamed live via www.itv.com/btcc.

Click here to see the final classification from Free Practice One at Snetterton.