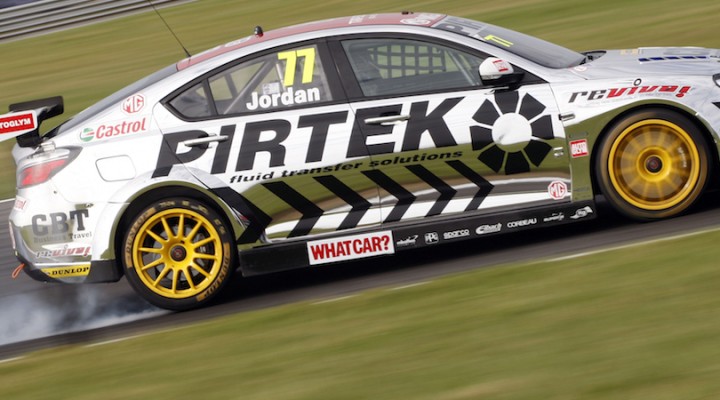 Andrew Jordan, Colin Turkington and Jason Plato slugged it out for top spot in Free Practice 2 at Snetterton with the champion trio blanketed by just 0.040s at the finish.

As in FP1 it was Plato’s VW leading the way into the closing stages, but this time he was pipped by team-mate Colin Turkington by just 0.020s. With the reigning champion looking set to scoop fastest lap honours Jordan’s Triple Eight MG then blasted across the line to foil both of them.

Sporting a one-off chrome livery for this weekend – to celebrate Jordan’s new 3-year deal with long-time partners Pirtek – a confident Jordan bounced back from a fairly low key morning session to signal his race-winning credentials for the weekend ahead.

The MG6 has always run well at the Norfolk circuit, most notably in the hands of its previous driver Jason Plato, so Jordan will hoping the combination of the car’s speed and his talent will help to get his championship challenge back on-track.

“The pace is good – we tried something completely different from FP1 and the car is a lot better,” he said. “There’s still time in it, we’ve got a bit too much understeer through the quick stuff, but as a base set-up that’s the best car I’ve had all year. The car feels much more hooked up, it’s working with me rather than me having to fight it – we’ll have to keep pushing as everyone will be going quicker in qualifying, but we’re confident.”

Somewhat of a Snetterton specialist, Plato continues to show front-running pace every time he takes to the circuit and this session was no different. His Team BMR team-mate Aron Smith initially led the way but Plato was soon ahead and with Turkington’s late performance it gave the squad an impressive 2-3-4 finish.

The top three drivers in particular raised the bar during the session with Jordan, Turkington and Plato circling less than a tenth of a second from the latter’s 2014 qualifying lap record.

Before the quick times were clocked there was a concerning moment for young Aiden Moffat. The teenager’s Mercedes A Class spun wildly at Montreal and eventually made heavy contact with the barrier. There was also a small fire in the car, but Moffat was able to walk away from the incident. He was, however, showing signs of concussion and after being assessed by the TOCA Medical Team at the circuit’s Medical Centre he has now been taken to a local hospital for a precautionary scan.

When the action resumed FP1 pace-setter Andy Priaulx was immediately back into the swing of things and his best time left him in an encouraging sixth place.

Qualifying from Snetterton for Round 16 of the 2015 Dunlop MSA British Touring Car Championship will take place at 15:45 with the action being streamed live on www.itv.com/btcc.

Click here for the final classification from Free Practice 2.