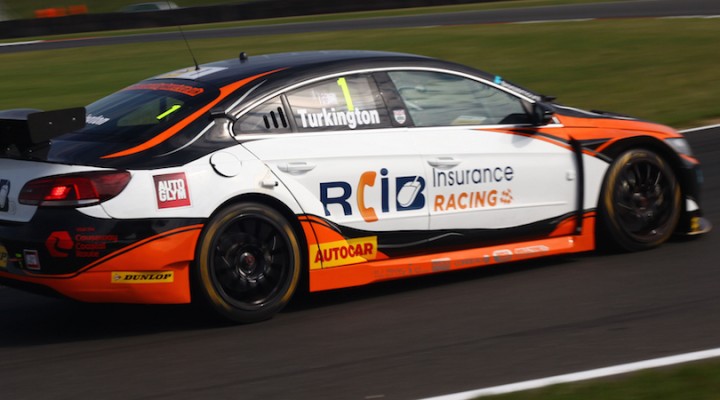 The fledgling squad has been in fine form throughout the season, but this was arguably its finest moment in a timed session as it scooped its first ever 1-2-3 finish. In fact, it was the first top three qualifying clean sweep in the BTCC since Vauxhall achieved the feat back in 2007.

The session commenced in fast and fierce fashion with no fewer than eight drivers immediately dipping under last year’s qualifying lap record, set by Plato in the MG6.

It was Jordan’s MG that led the field in Free Practice earlier today and he was back at the top during the opening stages of qualifying, before quickly being relegated by first Plato, and then Smith.

Honda’s Matt Neal and the West Surrey Racing duo of Andy Priaulx and Sam Tordoff were in the top six fight in the opening ten minutes, which concluded with a spin for Nic Hamilton’s Audi S3.

There was another wild moment shortly after as Stewart Lines spun his Toyota Avensis immediately in front of the identical machine of Kieran Gallagher. Both cars were able to continue without damage while the action at the front was hotting up again for the final flurry of timed laps.

Turkington hit the top with eight minutes remaining, and without setting fastest times in any of the three sectors round the 2.99-mile circuit. The Ulsterman’s consistency on what is the longest layout on the calendar proved vital, and although Smith fought back to improve his own time on the next tour, it wasn’t enough to dislodge Turkington.

The final threat came from MG Triple Eight Racing’s Jack Goff, who set the very fastest time in the opening sector. With all eyes on the talented young gun he unfortunately locked-up at the Complex and ran wide onto the grass. The moment was gone for Goff as he seemingly pushed his car beyond its boundaries of performance and he eventually had to settle for seventh.

So it was joy in the pitlane for Turkington who had long since parked his car, and he was quickly joined by both Smith and Plato as celebrations kicked off in the Team BMR garages.

The battle for fourth on the grid was no less frenetic with just 0.006s separating three legendary tin-top champions. Jordan’s MG took the honours ahead of Neal’s Honda Civic Type R, whilst Priaulx completed the top six. Tordoff dropped to eighth, behind Goff, by the finish.

The Speedworks Toyota of Tom Ingram secured ninth ahead of WSR’s Rob Collard, with the latter having been tenth in all three timed sessions during the day.

Notable absentees from the top ten included returnee Mat Jackson and championship leader Gordon Shedden. Jackson’s Motorbase Performance Ford Focus had set the pace during summer testing at Snetterton but he could only manage 14th today after citing a ‘lack of grip at the rear’ of his machine.

Shedden, whose previous lowest qualifying position of the season was seventh, finished 16th in qualifying at the Norfolk track. Mechanical woes blunted his challenge and the Scotsman will now have it all to do from the eighth row of the grid and with maximum ballast on-board his Honda Civic Type R.

Colin Turkington said: I was pushing on 100 per cent out there. I had a good run on my first set of tyres but the bonnet pin wasn’t secured properly which was a bit distracting. I knew I had pace though, it was just a matter of nailing the lap. We’ve been fast all day but we haven’t quite had the car pinned down until now. It shows the fruits of our labour over the break, we haven’t stood still and we knew there was an extra step to take to stay at the sharp end.

Aron Smith said: I’m over the moon for all of Team BMR. Of course I would have liked it to be me on pole – I think a big fly must have hit the windscreen on my last lap and cost me those three hundreths of a second! It’s one of those things – I think now we can work together tomorrow and have strong race one, two and probably three barring any upsets. I’m going to push for a win, but we’re going to work as a team and that’s the smart thing to do. All of us are on for a really good weekend – I knew this would be a good track for us and there’s definitely potential for three Team BMR wins tomorrow.

Jason Plato said: With 66kgs of ballast on the car, to be challenging for pole is fantastic. We know what the weight is worth around here – three quarters of a second – so weight corrected I’m on pole by three tenths on a 1:55.5s. I’m really pleased that out of all of us, I’m the quickest again, and it’s just the ballast that’s undone that. Gordon has also not had a very good qualifying session, so tomorrow is a good opportunity to take some really important points. It’s great for Team BMR too – when you look at where we were seven months ago, and it really shows what can happen if you get the right drivers and the right engineers steering development in the right direction. It’s great to be a part of it – but there’s a race to win tomorrow and I’m going to go for it.

Andrew Jordan said: I’m happy with that actually, it was a really nice lap. We haven’t quite got the legs on the VWs, but the car did a 1:57.4s in qualifying last year and it’s just done a 1:56.2s so it’s great. We’ve got work to do to get on the back of the BMR cars in the race, but we’ve got some ideas on where to find the time. I think they’ll be fighting out tomorrow so there could be an opportunity to capitalise on that, but we’ve also got to think about getting our fast lap in for race two.

Matt Neal said: I was probably hoping for a little bit better, but it was a tough qualifying and we had quite a bit of weight on the car. Looking at the problems Flash had though, I’ve got to be pleased with where we are – he had a bit of a power steering issue and he couldn’t get the speed out of it. I think we’re absolutely going to be taking it to the guys in front tomorrow – we’re on the softs in the first race which should put us on the front foot.

Andy Priaulx said: That was OK, but we had better pace than what we showed. Being two tenths off the pole time should make us happy – we’ve always said Snetterton was going to be one of the harder tracks for us – but at the same time I think we should be on the front row or at least in the top four. I had traffic on both of my fast laps which is disappointing. I went purple in a sector even when my tyres were past their best which bodes well for tomorrow. The pace is strong, and we’ll be good on the soft tyre so over the course of the three races I think we’re in good shape.

Click here for the final classification of Qualifying for Round 16 of the 2015 Dunlop MSA British Touring Car Championship.

Click here to watch an onboard of Turkington’s pole lap.