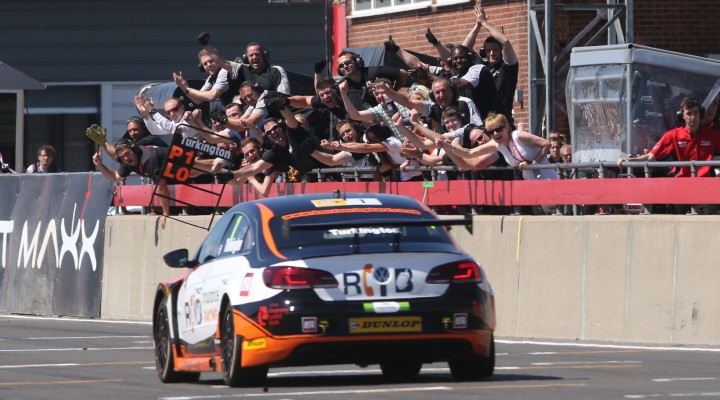 He became the first driver to take a second pole position of the season after getting the better of his Team BMR stable-mates Aron Smith and Jason Plato on Saturday, as the squad produced the first qualifying 1-2-3 in the BTCC for eight years.

The team backed up its pace in Sunday’s opener with a podium lockout as Turkington led home the same pairing.

Turkington made a steady getaway but immediately had to fend off a passing attempt by the sister VW of Smith, as Plato looked on closely from behind.

The trio settled down over the opening few laps with Smith and the ballast-laden Plato seemingly unable to keep pace with Turkington. While the gap remained fairly slim throughout the contest the Ulsterman would continue unopposed thereafter to take the chequered flag.

Things would turn from bad to worse for the Scotsman as he further relinquished his standings advantage with two non-finishes in the following races.

Turkington also won the second bout as he kept away from the drama down the order to secure his third triumph of the 2015 campaign.

The 33-year-old hauled his VW CC off the line and led commandingly into Riches for the first time. Adam Morgan’s Mercedes got the jump by the slow-starting BMW of Sam Tordoff, and Priaulx also nipped by his WSR team-mate before the end of the first tour.

Having been hit out of race one Rob Collard’s disastrous day continued as he was fired off into the barrier in race two, and there were several other incidents that saw the likes of Shedden, Aron Smith and Matt Neal all forced into retirement.

The other main title contenders made the most of the opportunity as Turkington led home Morgan and Priaulx, with new championship leader Plato taking fourth.

Goff made a great getaway from pole position and immediately set about extending a gap to the chasing pack. Running the Dunlop SportMaxx soft tyre, Goff was able to string a series of strong laps together until mid-distance. Although the performance in his rubber naturally tailed off towards the finish he was able to fend off Plato’s challenge and take the win.

Plato’s VW initially had a win-lose battle with Tordoff and Priaulx’s pair of WSR BMWs, as the Team BMR star passed the former off the line before being taken by the latter on the first tour.

Fifth place was held by Morgan’s WIX Racing Mercedes in the opening moments but double race-winner Turkington was soon ahead on lap two. Almost simultaneously Plato made arguably the move of the day ahead as he went late on the brakes into Brundle. Priaulx had no answer and Plato was through into second.

Morgan ran wide and onto the grass at Riches as Turkington too fell into the clutches of the chasing Jordan and Mat Jackson. Carrying maximum success ballast due to his earlier victory, Turkington’s VW first had to yield position to Jordan’s Triple Eight MG before Jackson’s Motorbase Ford sneaked through shortly after.

The top seven was then set until the finish, with the race undoubtedly being remembered for Goff’s first ever victory in the BTCC.

As the sun set over Snetterton it is Jason Plato now leading the standings by 16 points from team-mate Colin Turkington. Honda’s Gordon Shedden has slipped to third after his difficult weekend in Norfolk, whilst West Surrey Racing’s Sam Tordoff remains fourth.

Honda heads the manufacturer table but MG has reduced the deficit to just five points. WSR remain in contention in third.

Team BMR top the teams’ and independent teams’ order while Turkington holds the advantage in the independent drivers’ classification.

The Dunlop MSA British Touring Car Championship now moves on to Knockhill in two weeks time (22/23 August) for Rounds 19, 20 and 21.

Colin Turkington said: “It’s been a super weekend – two wins and a solid points finish in race three have really brought me into the hunt. I needed a performance like that as I was beginning to feel a little left out! There’s been a lot of rivalry between me and Jason [Plato] since day one, and he’s had a little bit of an advantage until now, but I’ve pretty much cracked it. There are a lot of strong drivers in this series, so competition comes from all angles. Snetterton plays to our strengths, but Knockhill might be a bit more of a workout. We’ll keep pushing though and the results will come.”

Jack Goff said: “I made my best start of the year, and what a time to do it! That’s the strongest the car has felt all season, and it was a great race. I could see Jason [Plato] in my mirrors and was thinking ‘of all the people to have behind me, it would be him!’ It’s finally happened though – I had a little wobble on the last lap where I just switched off for a split second but I managed to hold it together. It’s so good to get the first win for the team this year. Andy [Jordan] and I have both been working really hard, and I’m happy to finally make it to the top step. Hopefully the results will come like London busses now!”

Jason Plato said: “It’s been a great weekend – we were ten points behind coming into the weekend and now we’re leaving 16 ahead. An engineer would say that’s a delta of 26 – which means it’s been a very good weekend! I can’t remember a time when a team has scored a 1-2-3 in qualifying and then backed it up with a 1-2-3 in the race too. It’s nice to be at the top of the standings, I think we can be stronger than people might think at Knockhill. It’s definitely a BMW circuit, which is good because it will take points off some of our championship rivals. We’ll definitely be in the mix.”

Andy Priaulx said: “It’s been a brilliant weekend – to score two podiums at a track that we know isn’t one of our best is really positive. Let’s keep this momentum going now and start focusing on that championship. If we can put together three races like that when the car isn’t best suited to the track then we should be right up there at Knockhill where it’s been quick in the past. WSR has done a great job for us to be this strong – the racing at the front this weekend has been really hard and fair, it’s been great fun.”

Gordon Shedden said: “I don’t really know what to say. I don’t think I’ve ever had a weekend where I’ve had so much bad luck. It is what it is, we’ve got to move on and make the best of the next one now. These kind of weekends happen every now and then, but the team has worked so hard and while luck wasn’t on our side the car was still great. We’re going to put this one behind us and come out fighting at Knockhill.”

Matt Neal said: “The weekend hasn’t exactly gone according to plan. It was a bit of a rough weekend for both of us – for racing and results. At stages like this you have to look forward and as I said to ‘Flash’, in this game we’ve got to be able to roll with the punches – you’ve got to have tough races and tough weekends to appreciate the good ones. Unfortunately this has been a bit of a rough weekend for us but the positives are: we will be a bit lighter going into the next round, we’ve got a great car under us with some great speed and a great team behind us. I’m taking those positives, my glass is half full. It was a bad day at the office but we’ll bounce back.”

RCIB Insurance Racing has received a twenty point deduction from the Teams’ and Independent Teams’ championships for having changed a further two engines above the number permitted.