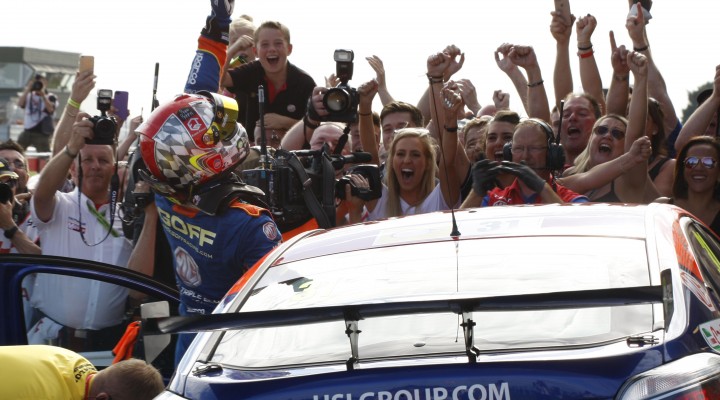 The talented young driver blasted his MG6 off the line and never looked back as he immediately set about extending a gap to the chasing pack. Running the Dunlop SportMaxx soft tyre Goff was able to string a series of strong laps together and although the performance in his rubber naturally tailed off towards the end of the 12-lap contest, he was able to fend off Jason Plato’s challenge to take the win.

Plato VW’s initially had a win-lose battle with the pair of BMWs driven by Sam Tordoff and Andy Priaulx, as he passed the former off the line before being taken by the latter on the first tour.

Fifth place was held by Adam Morgan’s WIX Racing Mercedes in the opening moments but double race-winner Colin Turkington was soon ahead on lap two. Almost simultaneously Plato produced arguably the move of the day as he went late on the brakes into the Complex. Priaulx had no answer and the double champion was through and into second.

Morgan went off at Riches as Turkington too fell into the clutches of the chasing Andrew Jordan and Mat Jackson. Carrying maximum ballast, Turkington’s Team BMR VW first had to relinquish position to Jordan’s MG before Jackson’s Motorbase Ford sneaked through shortly after.

The top seven was set until the finish but the battle for eighth changed hands a number of times. It was the popular Rob Austin who eventually came out on top in his Exocet Audi A4, ahead of Tom Ingram’s Speedworks Toyota and West Surrey Racing’s Rob Collard. The result for the latter at least provided some respite on an otherwise disastrous day for the multiple race winner.

Similarly Matt Neal provided his Honda Yuasa Racing team with a points finish on what had been the squad’s most challenging day in recent memory. Neal’s top six in the opener was the high point before both cars retired with damage in race two. Things failed to improve for team-mate Gordon Shedden in the final race, however, as the former championship leader again retired with a problem.

This was a race that will be remembered, however, as the first win for the impressive Jack Goff and MG’s maiden triumph of the 2015 season.