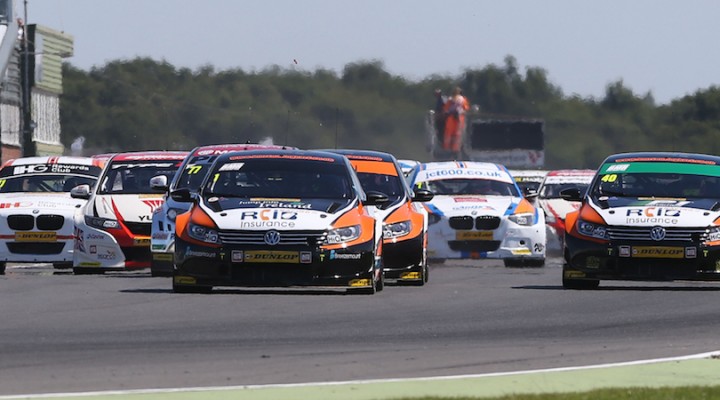 Turkington made a steady getaway from pole position but immediately had to fend off a passing attempt by the sister VW of Aron Smith, as Jason Plato looked on closely from behind.

The trio settled down over the opening few laps with Smith and the ballast-laden Plato seemingly unable to stick with Turkington. While the gap remained fairly slim throughout the contest the Ulsterman would continue unopposed to take the chequered flag and reignite his championship defence.

“I feel much more comfortable in the car,” he said. “We had two really good test days over the break and I’ve turned a corner in terms of confidence. We’re free to race at this stage and we all want to win, so it was pretty intense in the first few laps. We simulated this exact situation in testing, and it’s paid off with a brilliant result for the team. We’re in good shape – the car is fast and it’s going to be important to bag big points on days like this.”

Smith and Plato fell into the clutches of the battle behind which was led by Andrew Jordan’s Triple Eight MG for the 12-lap duration, although the personnel in close attention changed on several occasions.

Matt Neal held station in fifth initially while Andy Priaulx’s BMW took time to generate heat into its Dunlop SportMaxx soft tyres. There was an unfortunate incident behind them as West Surrey Racing’s Sam Tordoff hit his BMW 125i M Sport team-mate Rob Collard in the rear on the run down to Riches on the opening lap.

Collard seemed to brake early as the likes of Jack Goff bulked up ahead of him and Tordoff was caught unawares. The young talent, who has taken recent win at both Oulton Park and Croft, made heavy contact with the BMW ahead which eventually forced Collard into retirement. Tordoff continued but he did slip down the order as a result.

It was Goff’s MG and Dave Newsham’s Power Maxed Racing Chevrolet initially hounding the experienced pair of Neal and Priaulx. A feisty Newsham slipped down the inside of Goff on lap two and the MG fell further behind when Adam Morgan’s Mercedes made a similar move one tour later.

Morgan was by Newsham by mid-distance as Neal and Priaulx revisited their duel shortly after. The IHG Rewards Club BMW dived down the inside of the Honda Civic Type R at Riches on lap seven but immediately ran wide on the exit of the corner. This allowed Neal to repass Priaulx but the triple BTCC champion couldn’t hold on for long as the Guernseyman eventually made a move stick at the Bomb Hole.

This allowed Priaulx to pull away as Neal fell into the grasp of the chasing trio. The Honda star held on to sixth until the finish as Priaulx made it a four-car train in the scrap for second.

Turkington was busy taking a relatively comfortable win while second through to fourth were covered by just two seconds. Jordan and Priaulx actually looked quicker than the VW duo ahead of them in the closing stages but they eventually ran out time as Team BMR scored an historic podium hat-trick.

Despite making early progress from 16th on the grid then championship leader Gordon Shedden endured a difficult opening race. With his Honda carrying maximum success ballast his tyres seemed past their best in the latter half of the contest as he fell back behind Tom Ingram’s Toyota for tenth, before further moves followed from Mat Jackson’s Ford and Warren Scott’s VW.

Eventually Shedden had to settle for 14th, just ahead of the eye-catching Jack Sears Trophy joust, which was won by Josh Cook’s Chevrolet after a race-long battle with Mike Bushell’s Toyota.

The likes of Hunter Abbott, Jeff Smith and Stewart Lines recovered from wild moments during the race, with the latter’s incident also involving Nic Hamilton’s Audi. The BTCC rookie has noted that his throttle stuck open on the exit of Agostini, which subsequently fired his S3 into the barrier at high speed. The AmD Tuning squad are busy trying to repair the car but it’s not yet known if he’ll make the second race.