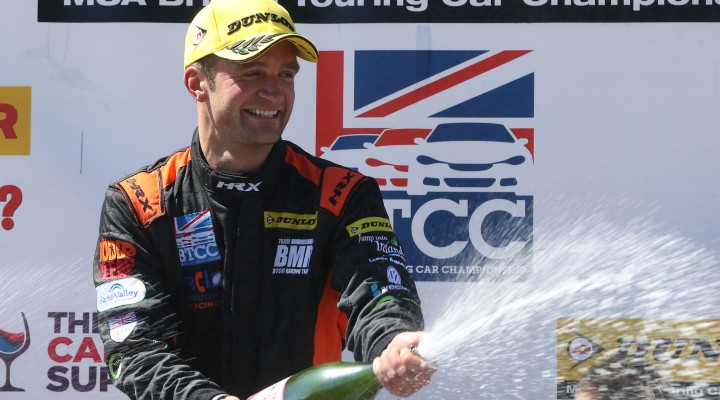 Colin Turkington kept away from the drama to secure his second Dunlop MSA British Touring Car Championship race of the day at Snetterton.

Many of the reigning champion’s rival fell out of the fight as a series of early incidents led to multiple retirements throughout the field.

Turkington hauled his Team BMR VW off the line and led into Riches for the first time in commanding fashion. Adam Morgan’s Mercedes got the jump by the slow-starting BMW of Sam Tordoff. Andy Priaulx was also by Tordoff before the end of the first tour as complete mayhem triggered down the order.

Rob Collard’s disastrous day continued as he was fired off into the barrier on lap one, in an incident that seemed to also involve Stewart Lines’ Toyota and the Ford of Barry Horne.

In a similar theme, Gordon Shedden’s weekend went from bad to worse as he was hit from behind by team-mate Matt Neal as the concertina effect spread through the field. Neal was then tagged by the Audi of Rob Austin and further contact followed between the triple champion and the Ford Focus of Mat Jackson.

There was another racing sandwich that saw Aron Smith’s VW squeezed out of the race and Dave Newsham also spinning out of contention. Tom Ingram was the other party involved and although he was able to continue and enjoy a race-long battle with Andrew Jordan, the Toyota eventually retired with a puncture on the final lap.

With both championship contending Hondas out of the race it was down to Team BMR, WIX Racing and West Surrey Racing to make the most of the opportunity, and they didn’t disappoint.

Turkington streaked to victory as Morgan held on at the head of a four-car train for second. Priaulx attacked time and time again but he failed to make a move stick while he also had to deal with Tordoff and Jason Plato behind. There was one change late on in the top order as the VW of Plato made an impressive move by Tordoff’s BMW going into Williams.

Jack Goff took sixth in the Triple Eight MG and with it pole position for race three, whilst his team-mate Jordan claimed seventh ahead of Motorbase Performance’s Jackson.

Exocet Racing’s Austin was ninth, with AmDTuning.Com’s Mike Bushell claiming his first top ten finish and with it the Jack Sears Trophy win.

Four other drivers scored their first championship points of the season with a best ever finish of 11th for James Cole, 13th for debutant Barry Horne, 14th for Robb Holland, and a first score for Support our Paras Racing with Derek Palmer claiming 15th.

Colin Turkington said: “All credit to my team, they’ve put another fantastic car underneath me. If anything the balance in that race was even better than the first. If you can pull out a couple of lengths in the first few laps then it makes the race so much easier to manage. I got a good start, I was just expecting to see the BMW come alongside me! I enjoy driving at the front, but it’s hard to keep focus and consistency. The car is quick enough for three wins, but overtaking is tough at the front, so we’ll be focussed on bagging more points.”

Adam Morgan said: “That was probably the hardest race I’ve ever done. Everyone has done a great job – I didn’t get the break on Andy [Priaulx] early on which meant I was looking in my mirrors for the entire race. The BMW badge in my mirrors kept getting bigger, but unusually I’m really pleased with my performance and I’m looking forward to race three now.”