HUNTER ABBOTT TO COMPETE AT KNOCKHILL 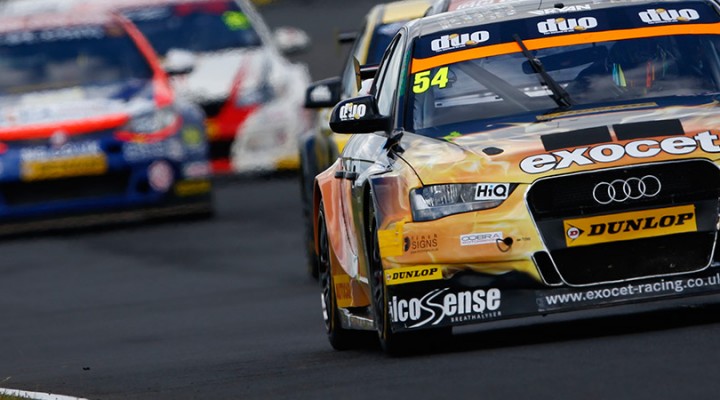 Hunter had been scheduled to miss the fixture to be with wife Susie as they prepare for the birth of their first child and it had looked like a suitable substitute had been found.

But explained Hunter: “Due to unforeseen circumstances last week, the deal fell through with the driver who was to going to stand in for me. We searched for another suitable driver but could not find someone before Tuesday, which was the last opportunity to get some running in the car before Knockhill.

“As a result I will be racing the Exocet AlcoSense Audi at the weekend with my fingers crossed that the little one doesn’t decide to make an appearance over the weekend and Susie will be at home watching the racing, hopefully with her legs crossed!”

Fife’s picturesque and undulating Knockhill circuit has been a happy hunting ground for the rear-wheel-drive RAR Audis in recent years with Team Principal Rob achieving four podium results from his last six races there. He is keeping his expectations in check, however.

Rob commented: “We’ve not got the fastest car in 2015 but at Knockhill the Audi has always gone extremely well – we’ve even been on the front row of the grid in qualifying the last two years. It’s clear that the whole BTCC grid has moved on in terms of pace and development – including ourselves – but let’s just see where we can get to this weekend.

“I’d love to think that Hunter and I can be up near the front where I feel the team thoroughly deserves to be and two top tens a fortnight ago at Snetterton, a circuit that is one of our weakest, surpassed our expectations.

“As well as its unpredictable weather which can really spice things up, Knockhill also has a reputation for throwing up plenty of controversial incidents. Finding that clear lap – never easy on such a cramped track lay-out – and qualifying well on Saturday to give yourself the best chance possible of three relatively clear races on Sunday will be very important.”