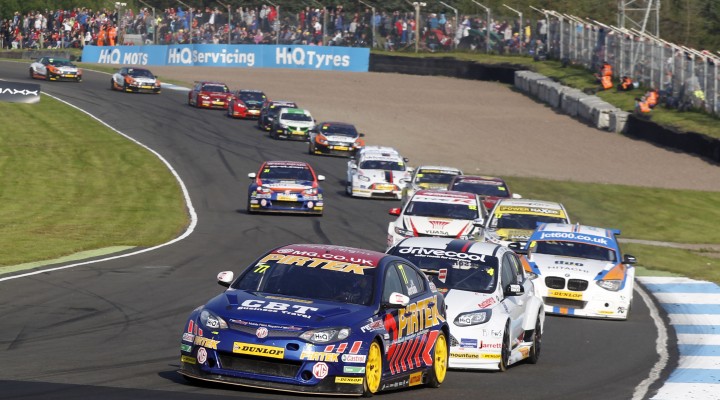 MG Triple Eight Racing’s driving duo produced a battling display in the Dunlop MSA British Touring Car Championship at Knockhill, with Andrew Jordan closing in on his title rivals, while Jack Goff scooped a trio of points finishes on only his second visit to the Scottish track.

Overcast conditions greeted the reigning manufacturer/constructor outfit on Saturday morning and by the time qualifying began late on Saturday afternoon, spots of rain filled the air, providing another test around the undulating 1.3-mile circuit.

The breathless session sensationally saw 23 cars covered by a mere eight tenths of a second. Such was the level of competition that the 0.145s between Jordan and Goff’s time represented five places on the grid. Red Bull ace Jordan left it until the final minutes to set a best time of 52.061 for eighth despite carrying 39kgs of success ballast, while Snetterton race winner, Goff left it late and had to settle for thirteenth with a 52.206.

Despite the threat of rain being forecast, beaming sunshine met the team on Sunday, with both drivers electing different strategies. Opting to run the soft tyre in the opening race, Jordan held station in eighth, while Goff made immediate progress moving into twelfth. As the duo settled into tackling the monstrous kerbs, Goff elevated himself into eleventh on lap three after an  incident with Aiden Moffat on entry into Butchers.

From then on both drivers held position, running competitively within the top fifteen. Battling the performance of the soft tyre, Jordan produced a gutsy defensive drive exiting Taylor’s Hairpin on lap twelve, firmly shutting the door on the Volkswagen of Colin Turkington. Come the chequered flag the Pirtek-racer crossed the line eighth whilst former Clio Cup champion Goff launched a late attack on reigning champion, Turkington but couldn’t find a way past, taking eleventh at the flag.

With temperatures continuing to soar at the picturesque Fife circuit, race two brought with it great optimism for Jordan as he lined up fifth after setting a strong lap time in race one. Sadly for Goff, a consequence of the contact with Aiden Moffat brought with it a third penalty strike of the season and a back row starting spot.

As Jordan followed the top four through Duffus Dip, Five Star Cases-backed racer Goff began his recovery on the soft tyre and was soon on the cusp of the top 20 come the opening tour. Jordan kept Sam Tordoff at bay in the early exchanges before the BMW driver suffered damage at Scotsman on lap three, removing him from proceedings.

Goff continued his juggernaut drive by moving into nineteenth on lap seven and Jordan was soon hounding the back of Collard’s BMW before a safety car period scuppered his progression. Jordan soon got into fourth as the race headed into its latter stages, captialising on a mistake made by Rob Austin at the exit of Butchers.

As the laps ticked by, Jordan and Goff both maintained their positions until lap 25, where the latter found a way past Josh Cook for fourteenth, rounding off a stellar drive on the soft Dunlop compound.

The reverse grid race, as is so often the case, produced yet even more action, with Jordan lining up seventh. Goff lined up fourteenth, where he had finished race two. With the sun still shining bright, both MG drivers delivered arguably their finest performances of the weekend in the final race.

Jordan had to defend all race long to hold onto seventh, sniffing at sixth place on a couple of occasions, but more often than not batting away the advances of Mat Jackson’s Ford Focus and a host of others throughout the race. Battling understeer from the outset, Goff also found himself with his elbows firmly out as he sat on the back of a long-line of cars all dicing for seventh, which was held by Jordan. Enjoying a late surge from fourteenth, Goff hustled his NGTC machine past Cook on the penultimate lap heading into Duffus Dip.

Virtue of his trio of consistent finishes, Jordan has closed the gap by 11 points to series leader Jason Plato. Results elsewhere this weekend see everything between Plato and Jordan contract too, with an exciting trio of race weekends in the offing.

Goff remains tenth in the standing  post-Knockhill, while MG also hold on to their second place position in the Manufacturer/Constructor standings.

The Dunlop MSA British Touring Car Championship heads to Corby in Northamptonshire next, where rounds 22, 23 and 24 see the series tackle the high-speed banking and twisty infield of Rockingham on 5-6 September.

Triple Eight Team Principal, Ian Harrison said: “Over the last few years we have always had tough weekends at Knockhill and this was no different. We have scored some good points though and you only have to look at the other cars that are similar to ours and they weren’t spectacular either. This is just one of those events that you want to get out of the way, but the guys did a good job this weekend to achieve what they did. We can roll into the next three weekends feeling confident about what is possible.”

Andrew Jordan said: “It was a good weekend all things considered. I absolutely got the most out of the car I could and that is probably the best I have driven all year over a whole weekend. It is a little frustrating that the car wasn’t where we wanted it to be in race three as opposed to race one or two. There are a few issues we need to iron out, but this circuit really doesn’t suit long-wheel-based cars, so coming here was always going to be a lesson in damage limitation. Race three again was just about sitting there and defending; there was nothing I could do to impact going forward. Again though, considering we are a little closer in terms of points we can feel confident heading to Rockingham now.”

Jack Goff said: “It was bang-average and we haven’t had the pace since free practice one which is a real shame. Andy had some better results but we’ve both been trying to improve the car as the weekend has gone on and it is been tough; we knew it would be though. I’m a little disappointed that I was penalised in race one for contact, but that’s done now. I showed that we have the pace on the soft tyre and had we had a few more laps, I could have made further ground. I’m feeling positive for Rockingham though and we’ll look to have a better weekend there.”