Ingram out in front 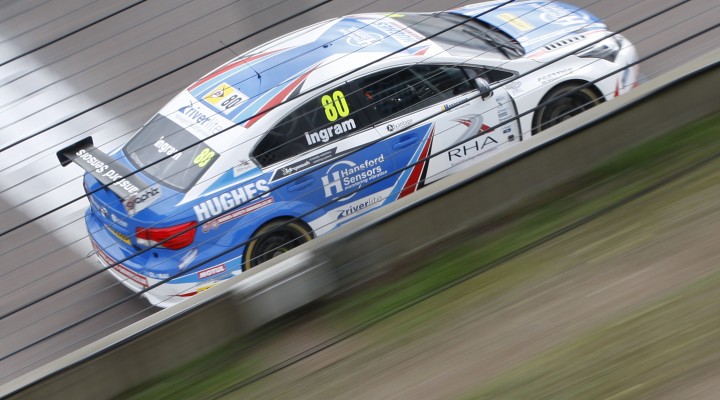 Ingram’s Toyota starred throughout the session as he traded early blows for top spot with Mike Bushell’s AmD Ford Focus, before the Speedworks speedster pulled clear late on to set a 1:24.135s benchmark.

The session commenced in damp conditions with the majority of this year’s championship challengers choosing to wait in the wings.

“We don’t expect there to be too much rain over the weekend, so there’s little to learn in these conditions,” said Jason Plato. “Plus there’s the risk of damaging the car of course.”

The circuit dried dramatically in the opening 20 minutes of the session, however, as times tumbled in the second half of running. Despite weather reports suggesting otherwise the rain returned in the closing stages, but some drivers were still able to improve their pace.

A late flurry of laps from Ingram’s Toyota saw the young talent edge to within a second of the lap record, and he was eventually followed in the timesheets by the Power Maxed Racing duo of Dave Newsham and Josh Cook.

Adam Morgan and Aron Smith saved their best laps until last to sneak into fourth and fifth, ahead of Colin Turkington’s Team BMR RCIB Insurance machine.

Returning racer Hunter Abbott – who missed Knockhill to be at the birth of his first child – was sandwiched in eighth between the two JCT600 with GardX BMWs of Rob Collard and Sam Tordoff, whilst Bushell eventually had to settle for tenth.

Plato, Mat Jackson and Andrew Jordan were among those who chose not to set a time. Both Honda Yuasa Racing cars did set times, although Gordon Shedden and Matt Neal’s efforts can only be regarded as early sighters as this stage of the weekend.

With dryer conditions expected as the day progresses all 30 BTCC cars will have to use Free Practice 2 to hone their cars ahead of this afternoon’s qualifying session. FP2 commences at 12:40 while qualifying can be seen live at www.itv.com/btcc from 15:40.