Jordan jumps to the top of the timesheets 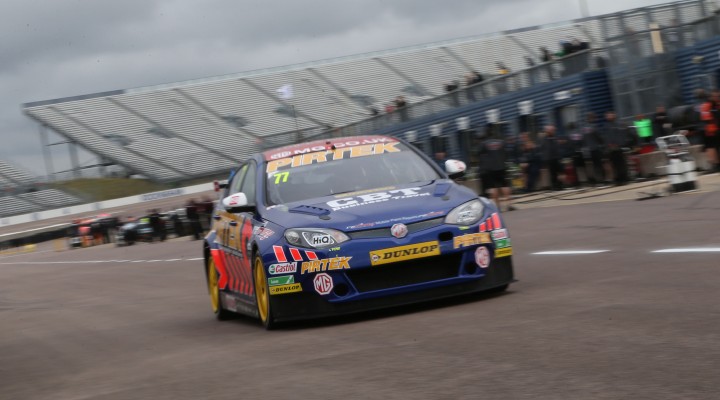 MG Triple Eight Racing driver Andrew Jordan topped the times in a feisty free practice session at Rockingham as the 30-strong field tried to make up for lost time.

With the opening session dampened by drizzle it was left for the final 40-minutes of practice running for drivers to find the right set-up ahead of qualifying.

Pace-setter from FP1 Tom Ingram led the way for much of the running once again, but as the times tumbled towards the end of the session it was Jordan’s MG that grabbed top spot by just 0.009s from the Toyota driver.

Triple Eight was looking strong right from the green flag, and Jack Goff was also in contention in the sister car. A late flyer from the Snetterton race winner promoted him to fourth place overall.

Jason Plato fired a warning shot to his championship rivals in the Team BMR RCIB Insurance VW. Sitting second behind Ingram for much of the session, as the chequered flag came out he was just 0.062s off the ultimate pace. With Plato carrying maximum success ballast into qualifying this afternoon, his main points rivals Gordon Shedden and Matt Neal will be fighting hard to capitalise. The Honda Yuasa Racing squad rarely shows its hand in practice, and while Shedden ended up sixth and Neal 16th, both are likely to be in the mix when the stopwatch comes out.

It was a strong session for Power Maxed Racing rookie Josh Cook. Along with team-mate Dave Newsham the pair of Chevrolets were fast throughout, running in formation to extract their best lap times. By the end of the 40 minutes Cook was fifth and Newsham a solid eighth.

Nick Foster, who is deputising for Andy Priaulx this weekend, ended the session as top BMW driver in the IHG Rewards Club car. He was just outside the top ten, and commented, “It’s good to be the quickest BMW driver, although I did use new tyres for the run. It was important to remind myself of the ultimate grip levels ahead of qualifying.”

The crucial qualifying session is coming up at 15:40 – watch live on the itv.com/btcc website if you are in the UK, or follow all the action on the btcc.net live zone.