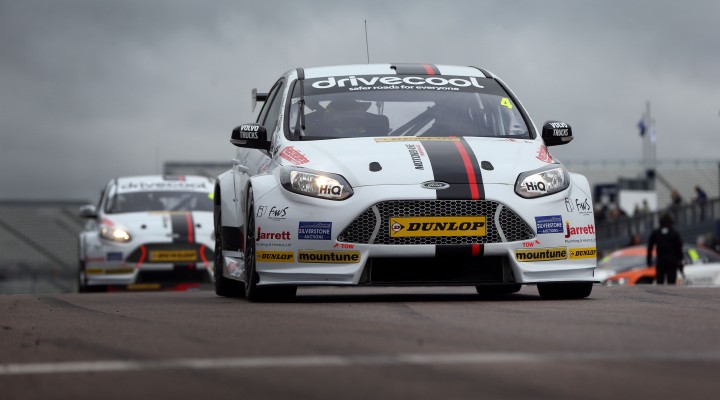 Motorbase Performance has its sights firmly set on adding to its race win tally as the Dunlop MSA British Touring Car Championship heads to Silverstone for the penultimate meeting of 2015 this coming weekend (September 26/27).

The Kent-based squad arrives at the home of British motorsport in fine form following a commanding performance at Rockingham earlier in the month that saw Mat Jackson claim its maiden race win of the season in the mountune-powered Ford Focus ST.

Since returning to the BTCC grid at Snetterton back in August, Motorbase Performance has made its mark on the championship, setting an impressive benchmark. Having scored points in every race to date, claiming three podiums, four independent race wins and an outright race win from the last two meetings Team Principal David Bartrum is as determined as ever to keep the pressure on as the season enters its final stages.

“Silverstone is a big weekend for us;” said Bartrum. “We had the comeback weekend at Snetterton before going to Knockhill where we started to see the glimmers of what could be with a couple of podiums and independent wins and then obviously we had a great weekend at Rockingham which underlined all of our hard work with an outright win.

“The next two rounds are very important; it’s all about proving that we now have the package to challenge for the championship next season.”

Well-suited to the strengths of the Focus ST with its high-speed straights, Silverstone has been a happy hunting ground for Motorbase Performance in recent years with the NGTC machine taking its maiden race win on the 1.64 National Circuit layout back in 2012, and the team boss is confident that the extensive chassis development work that has been carried out will see the Ford challenging at the front of the pack once more.

“The hard work that’s been carried out over the year is now beginning to pay off,” explained Bartrum. “There’s a lot of work gone into the chassis. We have our nice mountune engine which is doing its job well but the results aren’t all about that; the car is performing well on all levels as a package and we’ve shown that it’s competitive.”

A ‘home-coming’ event for Jackson at his local circuit, the 34 year-old has an excellent track record on the Northamptonshire circuit, having celebrated three podiums and an outright race win there in a Motorbase-built Focus.  With Jackson keen to add more silverware to his collection and team-mate James Cole resolute in his efforts to break into the top ten this weekend, the Motorbase team has high hopes of adding to that success.

“With the car performing as well as it has been and with Mat on form coming into one of our favourite circuits, I’d like to think that good things can come out of this weekend! James also has a lot of experience on this circuit and he’s starting to understand the car a lot better, he’s worked hard and so I think this weekend will be his best chance of proving his talent.”

Driver quotes:
#4 Mat Jackson:
“Silverstone has always been very kind to us in the past and with the car performing so well this year I feel sure that we’ll be able to repeat our past successes.

“The Focus is well-suited to the circuit and the chassis has always worked well there so with changes we’ve made this year I fully expect us to be challenging for pole and race wins again this weekend. Rockingham was a mega result for us and now we’ve had a taste of glory we’re ready for more!”

#44 James Cole:
“Silverstone is one of my favourite tracks, it’s one of those circuits that on paper looks simple but it’s a tough place to put a perfect lap together on so I’m expecting qualifying to be even closer than it was at Rockingham.

“My main focus heading into this weekend is qualifying. We’ve had great race pace but unfortunately I keep getting caught up in other people’s battles in the mid-pack. Having that space will hopefully give me the chance to show mine and the car’s true capabilities.”

Rounds 25, 26 and 27 of the 2015 Dunlop MSA British Touring Car Championship take place at Silverstone on September 26-27. Live coverage of Sunday’s event will be shown on ITV4 and itv.com and also in HD from 10.30am with itv.com featuring live streaming of Saturday’s qualifying session between 3.45 and 4.15pm.