Triple Eight looking to benefit from home advantage at Silverstone 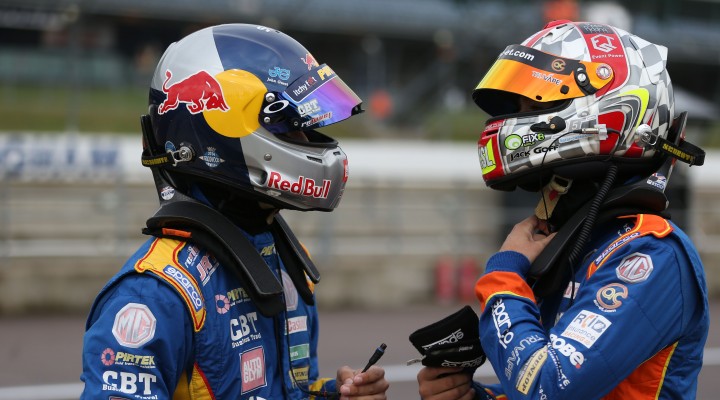 Battling hard for points at Rockingham earlier this month, both British drivers now head to the home of British motorsport optimistic of extending the MG6 GT’s exceptional run of form around the 1.64-mile National Circuit layout. Since the car’s debut under the NGTC platform in 2012, the high-speed straights and flowing corners have yielded three pole-positions and six race victories.

Triple Eight Racing has also enjoyed significant success at Silverstone since its inception in 1996, with the reigning manufacturer champions having added to their strong MG record with a further five pole positions and nine race wins.

Needing to leave Silverstone within 67 points of the series leader come the end of rounds 25, 26 and 27 to continue his quest of becoming a two-time champion, the Pirtek-backed driver is staying realistic on what can be achieved.

Citing understeer issues at Rockingham as one of the contributing factors for his progress being blighted, the 26-year-old is keen to try new, and different set-up changes to MG6 GT in a bid to continue moving further forward. Despite not running many of the planned changes during his maiden season with the factory-supported outfit, the Red Bull athlete is of the opinion he has nothing to lose and everything to gain – filling him with optimism.

Goff targeting ‘Superstar’ performance
Off the back of a weekend where raw speed failed to go hand-in-hand with luck at Rockingham, 5 Star Cases-backed racer Jack Goff is relishing racing at the home of the British Grand Prix. A member of the highly prestigious BRDC Superstars, which targets assisting the brightest talents in UK racing, the 24-year-old is setting his sights on producing a standout performance under the shadow of the BRDC clubhouse.

Like team mate Jordan, Goff has worked tirelessly throughout his inaugural campaign with the Longbridge-based manufacturer to engineer the long-wheel-based NGTC machine forward. Highlighting qualifying in particular as being more important than ever due to how competitive the series has been in 2015, Goff is ready to put it all on the line for that one-lap which could lead to a successful race day.

With just six races left to play out in the 2015 campaign, MG Triple Eight Racing are also still firmly in contention to retain the Manufacturer/Constructors championship, however both drivers will need to rally together to close the gap of 45 points to current leaders Honda/Team Dynamics.

Qualifying will be shown live on the ITV website (www.itv.com/btcc) at 15:40 this Saturday with race day coverage beginning at 10:00 on Sunday and being shown on live ITV4, itv.com and also in HD.

Quotes from the MG Triple Eight Racing drivers’ pre-Silverstone:
Andrew Jordan: “I’m still of the opinion that although it is mathematically possible, the title is gone for us now so there is no point thinking about it. The car should go well at Silverstone but the trouble is everyone has moved on so much that you can’t guarantee of replicating the form of previous seasons. We’re going to try some different things with the car set-up wise this weekend and a lot of them are ones we have never ran before. I’ve decided that we need to just go all out and try to improve the car to close the gap and I’m optimistic that what we have planned will enable us to do that. Obviously podiums and wins are the aim but we will see how things play out.”

Jack Goff: “We’re heading into Silverstone optimistic; the car has always gone well there although we know that everyone has moved their packages on a fair bit in 2015. That being said we have also moved the MG on from last year so this weekend is about getting the maximum out of what we have. The usual teams and drivers will be in the mix so qualifying towards the front will be even more important, as we have seen all season. If we can nail qualifying then we should be on for a good weekend so the aim has to be sticking the car on the front two rows ideally – if that box is ticked, podiums will be the next target.”