Pole to pole for Mat Jackson 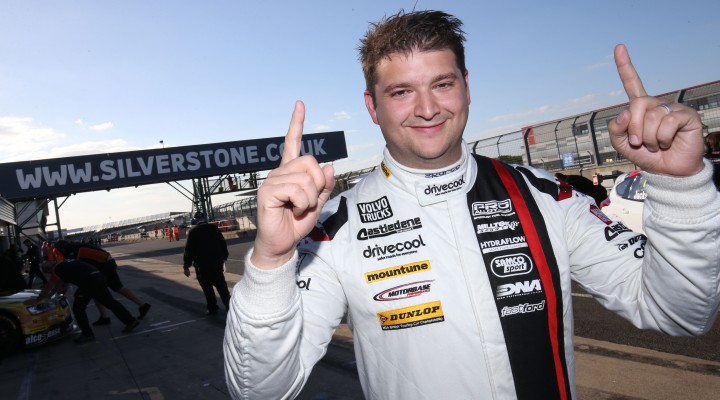 Like London buses Motorbase Performance has its second ever BTCC qualifying triumph, following on from Jackson’s success last time out at Rockingham.

Such was Jackson’s dominance during the session that he was able to set four lap times quicker than any other driver, albeit with his new lap record time of 58:078s only two tenths of a second quicker than Gordon Shedden’s best effort.

Championship leader Shedden will be delighted to have hauled his maximum ballast-laden Honda Civic Type R onto the front row of the grid, and he’d have been further buoyed to see his closest title rivals – Jason Plato and Matt Neal – down in tenth and eleventh respectively.

The session got off to a frenetic start with Jackson settling nicely into P1 immediately after the similar Ford Focus of Alex Martin had spun off at Maggotts. The timing of the incident was perfect for Jackson and disastrous for several others as the imminent red flag would scupper a number of flying runs.

Jackson continued bettering his own benchmark after the restart as Shedden moved up to second, but the battle behind intensified with every passing moment.

It was the West Surrey Racing BMW of Sam Tordoff and MG Triple Eight Racing’s Andrew Jordan in third and fourth respectively, as the two talented chargers look to keep their own mathematical championship chances alive.

Dave Newsham came from nowhere to fire his Power Maxed Chevrolet into the top five late on, relegating reigning champion Colin Turkington down a place in the process.

Despite the predicted success of the Team BMR RCIB Insurance VWs it was to be Turkington who would produce the best result for the outfit with sixth, as Aron Smith could only manage eighth with Plato a further two places back. The squad has endured a difficult day overall particularly following Warren Scott’s high-speed accident in Free Practice 1, which left the team boss in hospital nursing two fractured vertebrae.

Tom Ingram wedged his Speedworks Toyota between Turkington and Smith’s VWs on the timesheets to take seventh, whilst Jack Goff’s MG ended the session in ninth place.

Mat Jackson said: “The car felt fantastic in that session, the team at Motorbase work so hard and have given me a car that is capable of taking pole position and hopefully some wins tomorrow! We’ve got to try and win race one, then we’ll see how the car behaves with ballast on board. Thankfully we’re in the best place possible to do that. It’s great for us to come back in the second half of the season and show that we’ve got a winning package – it’s right on the money and I can’t wait for tomorrow.”

Gordon Shedden said: “All the planets aligned really and I got a great tow – in fact I think I ended up with two different tows! I hung it all out; it was bucking and bouncing and jumping and just kept on going forward – it was awesome. It’s so close that if I’d lost a tenth of a second I’d have probably started from outside the top 10 – it’s nuts. It’s a great place to start and it’s nice to be able to race because it feels like for the last few years we’ve not really raced here, we’ve just gone around looking in our mirrors. I’m under no illusions – it’s going to be really tough tomorrow. There are a lot of quick cars out there and I’ve got to keep my head down and just do the best job I can. You can come through, you know, and we’ve seen all season how quickly things can change – different tyre strategies and all sorts of different things will all have an impact.“

Sam Tordoff said: “We weren’t expecting that at all! We thought we were in for a really tough time of it here because top speed is so important. We did the first run and it was pretty much all we could get out of it, then on the second run I got a tow from Jack Goff and it made the world of difference – straight away we found about three tenths. We knew then that if we were going to do anything in qualifying we’d have to get a tow. On the final run I managed to latch on to Adam Morgan and it made the difference, I found half a tenth and jumped from P10 to P3. Fundamentally we have a great car, and if I can be in the pack and pulled along by the train then that’s going to minimise any losses. I’m confident of scoring some good points tomorrow – the races will come to us.”

Andrew Jordan said: “It was good, we put in a great run of laps. To be fair, Gordon [Shedden] has done a fantastic job with the weight he’s got on the car. I’m pleased with our lap time though, we’ve got some ballast onboard too so to get right up in the mix is encouraging. I’m going for that first win of the year every time I go out in the car, but I think we’ve got something we can battle with here more so than at previous rounds so I’m looking forward to it.”

Colin Turkington said: “It’s near the sharp end. We’ve had the most out of the car. We’d like to be a little bit higher but that’s as much as we had today. The car’s been strong. It’s been fast every session. There’s very little in the lap times – half a tenth changes things so we’re in good shape for tomorrow. The aim is to take as many points from our rivals as possible. For me to have a chance at Brands, I need to close the gap tomorrow. I need to take a good chunk of points out of Gordon and Jason, which isn’t going to be easy but that’s the plan.”

Jason Plato said: “Traffic slowed us down a little bit – it probably took a tenth off. There’s nothing you can do about it though – but for whatever reason since and including Rockingham we’ve been struggling in a straight line. At one point at Rockingham we were pretty much last in the speed traps with full ballast and mid-pack with no ballast and that’s not what we’ve come to expect from this car, so we think we might have a slight engine problem. The car is there or thereabouts – we’re not two tenths off because we’re not good in the corners. It should actually help us a bit being in the pack and able to slip stream to move forward tomorrow, but hopefully we’ll have found the issue by then.”