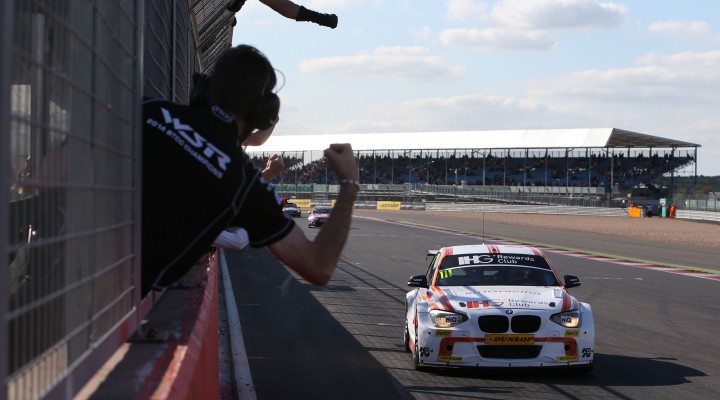 Team IHG Rewards Club racer Andy Priaulx has claimed victory in the second BTCC contest at Silverstone after getting the better of Jack Goff and pole position man Mat Jackson.

The triple world champion blitzed past Goff’s MG6 off the line and he began reeling in the fast-starting Ford Focus of Mat Jackson as his BMW 125i M Sport generated heat into its Dunlop SportMaxx tyres over the opening laps.

Priaulx got a run on the exit of Copse on lap eight before storming around the outside of Jackson and eventually making the move stick into Maggotts. The West Surrey Racing-run car pulled away from there and Priaulx went on to claim the 50th victory of his motor sport career. Worse was to come for Jackson, however, when a puncture forced him completely out of contention.

“My 50th win and I’m so delighted it’s in a BMW,” enthused Priaulx. “The start was good. Mat [Jackson] was defending well but Mat made a mistake through Copse. I had to jink left but I just about made the move stick. Then I knew I couldn’t afford to make a mistake so I got my head down. That’s what makes the BTCC so great – it’s a fight from start-to-finish.”

Goff grabbed second after he defended well from his fellow Clio Cup graduate Smith. “Qualifying didn’t go to plan so it’s nice to reward the team with this result,” said Goff. “Andy [Priaulx] got us off the line but after that it was a really good race. I got a bit of a tap from my good friend Aron [Smith] but we hung on to score a hard-earned podium.”

Championship leader Gordon Shedden hounded Andrew Jordan’s MG for much of the contest before last lap heartache befell the latter. A puncture for Jordan sent him tumbling down the order, leaving his mathematical championship chances hanging by a thread, as Shedden went on to take fourth from team-mate Matt Neal.

Most of the action came in the lower half of the top ten in a battle that was eventually won by Sam Tordoff. The young Yorkshireman slipped by team-mate Rob Collard while the sister BMW was busy scrapping with James Cole’s Ford and Tordoff was soon up to eighth with an eye-catching pass by the Motorbase Performance driver on lap 13. Eighth became sixth with Jackson and Jordan’s punctures, which also benefitted a number of other drivers.

Jason Plato battled back from a disappointing opening race to take seventh, despite a slow start to the contest for the double champion. The race eventually came to him and he surged into the top ten before then making one of the moves of the day around the outside of team-mate Colin Turkington at Brooklands.

Turkington and Collard claimed eighth and ninth respectively, whilst Cole rounded out the top ten after an impressive drive. Cole’s best ever result in the BTCC was further rewarded as he’ll now start the final race of the day from pole position.

Adam Morgan’s Mercedes took 11th from Josh Cook, Tom Ingram and Aiden Moffat. Cook and Ingram made contact several times on-track but Cook was later penalised for an incident with Moffat. He was handed a three-second penalty by the Clerk of the Course and was subsequently classified behind both Ingram and Moffat.