Victory and podiums for WSR at Silverstone 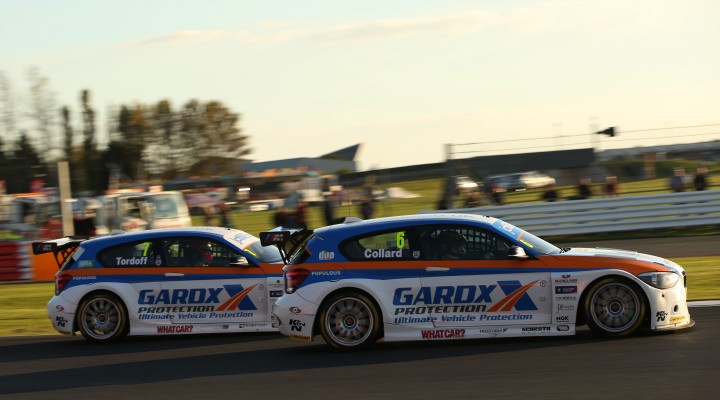 Andy Priaulx produced a memorable return to the championship as he claimed a sensational victory for Team IHG® Rewards Club. The Guernseyman could be forgiven if he was a little rusty around the 1.64-mile National circuit, particularly having missed the most recent tin-top round at Rockingham due to clashing GT commitments with BMW, but that simply wasn’t the case. His challenge was made all the tougher with a grid penalty also hanging over him, which meant he would start the opening race from the back of the grid.

In that encounter Priaulx was able to set a lap time just 0.063s shy of the pace-setting Ford Focus, handing him a vital place on the second row of the grid for the next bout.

Far from settling for what would have been a welcome podium position Priaulx immediately set about moving forwards when the lights went out. He blasted his BMW 125i M Sport off the line and past Jack Goff’s MG before hounding Jackson’s Ford during the opening laps.

The pivotal moment came on lap eight as Priaulx got the perfect run out of the ultra fast Copse corner and he launched his #111 IHG® Rewards Club BMW around the outside of Jackson in an audacious move. Priaulx’s bravery and skill paid off as he completed the move at Maggotts before going on to score a commanding victory – the second of his BTCC comeback campaign and the first for BMW at Silverstone since 2008.

After the race Priaulx commented, “It’s my 50th career win and I’m so delighted it was in a BMW. Everyone at West Surrey Racing and the Team IHG® Rewards Club squad has worked so hard and it’s great that the BMW has been so competitive at a circuit that normally doesn’t suit rear-wheel drive cars. We made a good start in race two and then we pressured Mat Jackson until he made a small mistake. We still had to get the job done and it was a really good move in that won it, but it was a scrap from start-to-finish. We’re looking forward to going to Brands Hatch and hopefully we’ll finish the season on another high.”

With Priaulx on the top step in race two, the final battle was to feature his stablemates Sam Tordoff and Rob Collard at the head of the field.

Collard battled for the lead early on before eventually settling into second, whilst Tordoff moved into third behind his team-mate. The team held its collective breath as the BMW drivers fought tirelessly for position until the latter stages, but both produced speedy and professional displays. Collard even let Tordoff by to allow his younger team-mate a chance at attacking race leader Colin Turkington but the victory wasn’t to be, so Sam let Rob back past in the closing laps and the pair crossed the line for a formation finish, much to the delight of the Team JCT600 with GardX squad.

Fresh from the podium celebrations, Sam Tordoff said, “For us both to end the day on the podium is fantastic for WSR and everyone involved with Team JCT600 with GardX. It was a feisty scrap and I was grateful that Rob [Collard] gave me the opportunity to fight for the lead. I’ve been really pleased with the pace of our BMWs and we actually could have scored even more points if things had fallen our way. It has been a good day though and we can go to Brands Hatch with renewed confidence.”

Rob Collard added, “We’re working together on behalf of Team JCT600 with GardX so it was important that we remained professional and brought the cars home. We battled hard, but fair, so I am delighted that both Sam [Tordoff] and I got to enjoy this moment together on the podium. We knew Silverstone wouldn’t be our best track but the BMW was still strong and we scored a good haul of points – roll on Brands Hatch.”