Further progress made at AmD 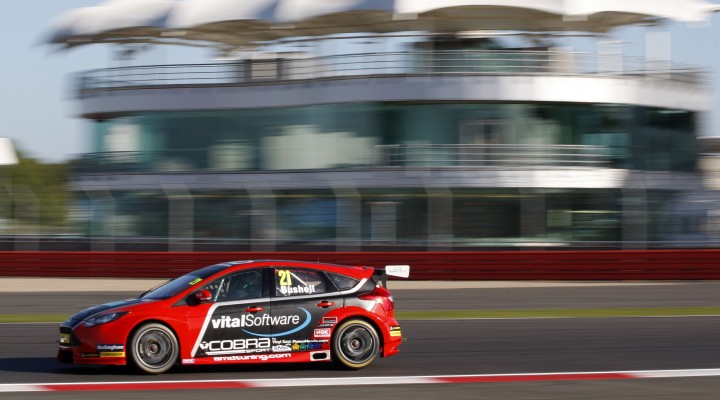 West Thurrock-based AmDTuning.com team came away from the Silverstone weekend with a brace of points finishes thanks to reigning Clio Cup champion Mike Bushell, whilst there was more progress for team-mate Nicolas Hamilton who continued to take huge strides forwards in only the fourth event of his BTCC career.

With the team having made a number of radical changes to his Ford Focus ahead of the weekend, Mike headed to Silverstone in optimistic mood and he was on the pace throughout Saturday; ultimately qualifying in a solid 15th place as best placed of the rookie drivers.

Mike’s hopes of a points finish in the opening race looked to have been given a hit when he was knocked sideways in the early stages at Brooklands, but he recovered well to fight his way back from 19th place to take the final point for 15th place – setting a fastest lap just four-tenths of a second off the pace.

Running the soft compound Dunlop tyre in race two would prove to be a more challenging affair for Mike as he failed to make it into the points in 17th, but he would then produce his best performance of the day in race three to fight his way through to 13th, giving him top rookie honours in the final race of the weekend.

“I’m really pleased with the way the weekend has panned out and especially the final race as we were able to keep in touch with the main front-runners ahead,” claimed Bushell. “Race day started quite well and to come back from the contact early on to finish inside the points was encouraging, although it was harder in race two as we struggled for pace on the soft tyre. Race three was really good through and we held our own against some strong opposition to finish 13th.

“When the car has settled down in the races, we’ve been able to show some really strong pace this weekend but we just lack that last little bit in qualifying. However, the progress we’ve made has been good and I think we are in a good place heading for Brands Hatch. Hopefully we can end the season on a high there in a few weeks.”

Nicolas endured a more difficult start to the weekend when an incident early on in the opening practice session saw his Audi S3 spin off into the gravel at Becketts. Limited to just eight laps as a result, Nicolas was left with work to do in the second session but made encouraging progress and then took a solid 25th on the grid for race one; his best lap being quicker than the car had managed last year in the hands of former driver Robb Holland.

The opening race would prove to be a challenge for the BTCC’s first disabled driver after being tipped into a spin, and he would then struggle with the balance of the car before a spin himself under braking at Brooklands. Unfortunately a broken alternator cable – a legacy of the earlier contact – would then leave him unable to get the car restarted to rejoin.

Race two however would be much more positive for the 23-year-old, who gradually worked his way forward through the pack from 28th on the grid to climb into the top 20. His hard work would be undone on the penultimate lap however, when contact with Simon Belcher’s Toyota coming though Luffield led to a right-rear puncture, with the tyre letting go as Nicolas crossed the line to start the final lap. The end result was contact with the barriers on the outside of the circuit that forced him into retirement for a second time.

Nicolas would end his weekend with a solid run to 22nd place in the third race of the weekend, recovering from losing time after an early safety car period to chase down the cars ahead and finish just five seconds away from the top 20.

“The end results leave me with mixed emotions but I think we’ve made more progress from Rockingham which we have to be happy with,” noted Hamilton. I was on the back foot a bit after the incident in FP1 as it cost me valuable track time, but I qualified where we expected to be and felt good for race day.

“In race one I struggled with the balance of the car and that ultimately led to the spin, and unfortunately there was a problem with the alternator and the car wouldn’t fire up to rejoin. In race two however, I think I was probably having my strongest race in the BTCC so far as I was racing hard in the pack, getting stuck in and making up places. It’s just a shame that someone else decided to hit me in the rear at Luffield, which caused the puncture that put me off into the wall.

“I got a decent start in race three but lost out a bit behind the Safety Car. However, I caught up with the pack and managed to make up some places and then spent time following Andy Priaulx, who didn’t really pull away from me. Overall, there are a lot of positives to take away from the weekend and I can head to Brands Hatch full of confidence.”

Team Principal Shaun Hollamby reviewed the squad’s fortunes, saying, “Overall it’s been a positive weekend for us as a team and I think both drivers have done a good job. Mike’s pace across race day has been encouraging and to pick up two points finishes, and be first rookie home in race three, is really pleasing. The changes we made to the Focus coming into the weekend have clearly worked as he felt more comfortable in the car and hopefully he can build on this weekend on Finals Day in a few weeks.

“For Nicolas, there has been more progress and this weekend I think he’s really been able to get involved and challenge the other guys on track for the first time. He showed that he wasn’t prepared to be bullied, and it’s a shame that he failed to finish two of the races through no fault of his own. However he can hold his head up high with his performance and like Mike, it would be good if he can take further steps forwards at Brands Hatch.”